Italian Prime Minister Matteo Renzi announced his resignation hours after learning he had suffered a crushing defeat in a referendum on constitutional reform.

Italian voters rejected a constitutional reform plan, according to exit polls which showed that the “No” campaign had prevailed following Sunday’s referendum.

“My experience of government finishes here,” Renzi told a press conference, acknowledging that the No campaign had won an “extraordinarily clear” victory in a vote on which he had staked his political future.

Interior ministry projections suggested the No camp, led by the populist Five Star Movement, had been backed by 59.5 percent of those who voted.

In voting No, Italians also delivered a rebuke to Italy’s industrialists, banks and other establishment institutions, which had staunchly backed the referendum.

The anti-reform victory, which could spook investors, comes just as the government had made some inroads in cutting the staggering rate of youth employment and while Italy’s banks have urgent need for recapitalisation.

Nearly 70 percent of Italians entitled to vote on Sunday cast their ballots, an exceptionally high turnout that reflected the high stakes and the intensity of the various issues involved.

Renzi said he would be visiting President Sergio Mattarella on Monday to hand in his resignation following a final meeting of his cabinet.

Five Star founder and leader Beppe Grillo called for an election to be called “within a week” on the basis of a recently adopted electoral law which is designed to ensure the leading party has a parliamentary majority – a position Five Star could well find themselves in at the next election.

“Democracy was the winner,” Grillo wrote in a post-vote blog that marked a significant change in the party’s position on the electoral law. Before the referendum, Five Star had been arguing for it to be revised.

Most analysts see early elections as unlikely with the most probable scenario involving Renzi’s administration being replaced by a caretaker one dominated by his Democratic Party which will carry on until an election expected to take place by the spring of 2018.

Finance Minister Pier Carlo Padoan is the favourite to succeed Renzi as prime minister and the outgoing leader may stay on as head of his party – which would leave him well-placed for a potential comeback to frontline politics at the next election, whenever it is.

Characteristically confident – detractors say arrogant – Renzi, 41, and Italy’s youngest prime minister, had bet his political future – or at least his current premiership – on a Yes vote win, and campaigned hard for a victory in recent weeks to confound opinion polls indicating that it would likely go down to defeat.

Renzi had been hoping to beat off the rising populist forces that have gained traction across Europe, as well as with the US presidential victory last month by billionaire political outsider Donald Trump.

“Italy has just done something very interesting. After all, Italy is one of the founding nations of the EU but I don’t think it’s mistaken to look at the results of this vote alongside the Brexit vote earlier this year, as well as, frankly, the Trump vote in the United States,” Patrick Rumble, Italian professor at the University of Wisconsin, told Al Jazeera.

Renzi is widely expected to be asked to stay on at least until a budget bill can be passed later this month. Then he or some other figure, perhaps from his Democrats, parliament’s largest party, could be asked to lead a government focused on electoral reform.

The current electoral law would grant the party with the most votes a generous bonus of seats in parliament.

Renzi’s Democrats and the centre-right opposition of former Prime Minister Silvio Berlusconi want the law changed to avoid risking that the bonus would go to the Five Star Movement should it lead in the polls. 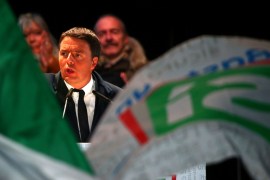 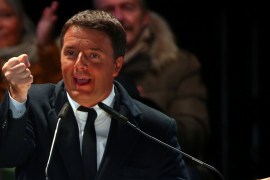 The December 4 vote could alter the country’s constitution and reform the 70-year-old republic.