A fire at a luxury hotel in the Pakistani city of Karachi has killed at least 11 people and injured scores of others, according to officials and a doctor.

“We have received 11 dead bodies and 75 injured, four women were among the dead,” he told the AFP news agency.

The blaze broke out in a ground-floor kitchen of the Regent Plaza hotel and trapped guests in upper floors, the Dawn newspaper reported. The hotel has more than 400 rooms.

Video footage showed some hotel guests using a chain of bed sheets to climb down from windows of top floors as smoke filled the hotel.

A man standing at a balcony kept waving for help but the hotel did not have any means of reaching him, a survivor, Hamid Ali, told a local Pakistani TV channel.

Khalid Mehmood, another survivor injured in the incident, speaking from his hospital bed, said: “We tied the bed sheets together to make a rope, and used that to climb down from the fourth floor.”

“We also had to jump midway, as the bed sheets were not long enough.”

Karachi Mayor Waseem Akhtar told reporters the cause of the fire was not clear.

Jamali, the doctor at Jinnah Hospital, said some foreigners were among those being treated for burns. Suffocation caused more deaths, she said.

The Reuters news agency reported that the fire was contained at around 9:30am (04:30 GMT).

Many Pakistani buildings have low health and safety standards, while the city’s firefighters are often equipped with poor and inadequate equipment. 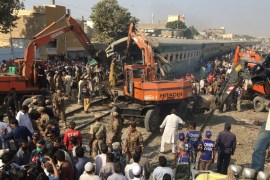 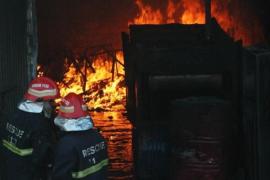