The official result of the election is not expected before Monday, but the Freedom Party (FPOe) conceded defeat within minutes of the poll projections being released, shortly after voting ended on Sunday.

The projections had put Van der Bellen at 53.6 percent ahead of the FPOe’s Norbert Hofer at 46.4 percent.

“I am infinitely sad that it didn’t work out,” Hofer said in a posting on his Facebook page less than an hour after polls closed.

Hofer, who had been campaigning on an anti-immigrant platform, successfully challenged the May presidential election result that was narrowly won by Van der Bellen.

The EU nation’s Constitutional Court ordered a repeat election after the Freedom Party alleged that ballots were counted without proper oversight in many towns.

The election, which was planned for October, had to be pushed back to December.

Hofer, one of the deputy presidents of Austria’s parliament, has won support from nearly half of the voters by criticising the government for allowing 90,000 refugees and migrants to enter the country last year.

Van der Bellen had warned that Hofer’s recent soft EU stance only masks his wish to destroy the bloc, in line with like-minded populist movements in France and Germany.

“Do we want to see Austria as a friendly, open, bright country?” the economic scholar said in a speech.

“Or do we want to see it as a country that is threatened by conspiracies, where fears take over, where everything is terrible?” he said, challenging the Freedom Party’s world view.

While the president’s role is traditionally largely ceremonial, Hofer had made clear he wanted to be an interventionist head of state, threatening to dismiss a government if it raises taxes, and calling for referendums on a range of issues, even though referendums are beyond the job’s remit. 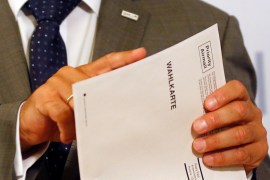 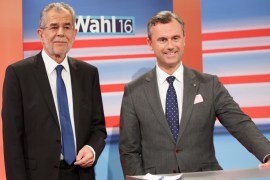