Mirziyoyev, the Central Asian country’s prime minister for 13 years, received more than 88 percent of the vote in Sunday’s poll, according to the Central Election Commission.

Murza-Ulugbek Abdusalomov, the commission’s head, said on Monday that at least 15.9 million people voted for Mirziyoyev.

An observer mission led by the Organisation for Security and Cooperation in Europe said there were “indications of ballot box stuffing and widespread proxy voting” during the vote.

“The dominant position of state actors and limits on fundamental freedoms undermined political pluralism and led to a campaign devoid of genuine competition,” said Peter Tejler, the head of the mission.

WATCH: What’s next for Uzbekistan?

Mirziyoyev, 59, seemed to face little actual competition in the vote. Two of his election rivals were the same pro-regime candidates that Karimov himself had faced in the last presidential election in 2015.

He has vowed to push ahead with the legacy of Karimov, who succumbed to complications from a stroke in September at the age of 78 after ruling for more than a quarter of a century.

Under his rule, Uzbekistan enjoyed mostly cordial relations with foreign powers active in the region but kept all of them at arm’s length, while regularly threatening smaller neighbours Kyrgyzstan and Tajikistan.

The country, with the region’s largest army, left a Moscow-led security bloc in 2012, and in 2005 ejected US forces from a military base used for Afghanistan operations following a bilateral spat.

Uzbekistan, Central Asia’s most populous nation, is rich in natural resources and borders Afghanistan, making it of strategic interest to Russia, the United States and China. 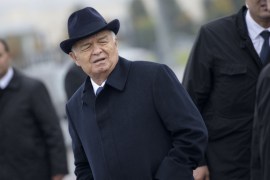 What’s next for Uzbekistan?

President Islam Karimov died this week after suffering a stroke.