More than a dozen Nobel laureates have criticised Myanmar leader Aung San Suu Kyi for failing to uphold the human rights of Rohingya Muslims in the country’s Rakhine state, urging for immediate action to avoid “ethnic cleansing and crimes against humanity”.

In an open letter to the United Nations Security Council late Thursday, 23 global icons, including 13 laureates and 10 global leaders, expressed their disappointment at what they see as state counsellor Aung San Suu Kyi’s failure to ensure Rohingya rights.

“Despite repeated appeals to Aung San Suu Kyi, we are frustrated that she has not taken any initiative to ensure full and equal citizenship rights of the Rohingya,” the letter, with signatories including Desmond Tutu and Shirin Ebadi, said.

“Ms Suu Kyi is the leader and is the one with the primary responsibility to lead, and lead with courage, humanity and compassion,” it said.

The violence had the hallmarks of Rwanda’s 1994 genocide, as well as ethnic cleansing in Sudan’s western Darfur region, Bosnia and Kosovo, said the letter.

In recent weeks, more than 27,000 people belonging to the persecuted Muslim minority, a group loathed by many of Myanmar’s Buddhist majority, have fled a Burmese military operation in Rakhine state launched in response to the attack of border posts by armed groups.

At least 86 people have been killed in the crackdown launched after attacks on police posts near the border with Bangladesh on October 9.

Rohingya survivors say they suffered rape, murder and arson at the hands of soldiers, accounts that have raised global alarm and galvanised protests around Southeast Asia.

Azeem Ibrahim, of the Center for Global Policy, a US-based think tank, told Al Jazeera this was the first time a Nobel Peace laureate had been denounced by such a large number of fellow laureates.

“This is an unprecedented letter. Never have we seen one Nobel laureate being condemned by so many other laureates,” he said.

“I think this letter was born out of the frustration of activists around the world with Aung San Suu Kyi’s inability to get a handle on the situation despite the many opportunities afforded to her.

“This is not the first time such a letter has been issued. In May of last year, we saw seven Nobel laureates accusing Aung San Suu Kyi of actually presiding over a genocide.”

The signatories asked the 15-member Security Council to add the “crisis” to its agenda “as a matter of urgency, and to call upon the secretary-general to visit Myanmar in the coming weeks” – either current UN chief Ban Ki-moon or his successor Antonio Guterres, who will take over the post next month.

“On repeated occasions, in interviews with the foreign media, whether it was the Washington Post or BBC, she actually refuses to even use the term Rohingya,” he said.

“She refers to them as either Muslims, Rakhine or Bengalis, which is essentially the narrative … that the Rohingya are illegal immigrants from Bangladesh.”

The Muslim Rohingya have languished under years of dire poverty and discrimination from a government that denies them citizenship.

The UN and other rights groups have repeatedly called on Myanmar to grant them full rights.

Bangladesh’s government has been under pressure to open its border to the fleeing refugees, but it has reinforced its border posts and deployed coastguard ships to prevent fresh arrivals. 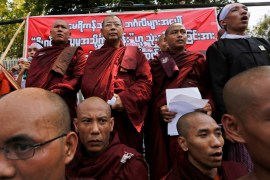