The government of Syria and some opposition groups have signed a ceasefire deal and agreed to start peace talks, expected early in the New Year.

It remains to be seen if the agreement would take effect and hold, with Russia and Turkey pledging to guarantee the ceasefire, which was due to begin at Thursday midnight local time.

Previous UN-backed attempts to end the Syrian civil war, which started as a largely unarmed uprising against President Bashar al-Assad in March 2011, have failed and often led to fierce fighting.

Al Jazeera’s Charles Stratford, reporting from Gaziantep in Turkey near the Syria border, said: “There are some serious questions being asked about one opposition group in particular that is considered a terrorist organisation – Jabhat Fateh al-Sham – which has been very successful in its battles against the Syrian regime.”

Inside Story: Syria war crimes probe – Will anyone be charged?

Earlier in the day, Russian President Vladimir Putin announced that an agreement had been reached on a countrywide ceasefire for Syria, with Russia and Turkey to act as guarantors.

He said the truce would begin at midnight on Thursday (22:00 GMT) and be followed by peace talks between the Syrian government and the opposition in Kazakhstan’s capital, Astana.

Russia launched its air war in support of Assad’s forces in September 2015, marking a major turning point in the Syrian government’s fight against armed opposition groups.

A statement carried on Thursday by Syria’s state news agency SANA said the truce agreement excluded the Islamic State of Iraq and the Levant (ISIL) group, Jabhat Fateh al-Sham, the group formerly known as al-Nusra Front, and “groups linked to them”, without specifying who these groups are.

Al Jazeera’s Natasha Ghoneim, reporting from Moscow, said that three different documents had been signed as part of a trilateral agreement involving Russia, Turkey and Iran.

“The first document lays out an agreement between the Syrian government and opposition groups on the ground,” she said.

“The second document includes measures designed to control the ceasefire, and the third lays out what needs to happen next in order for there to be peace talks.”

The Turkish foreign ministry confirmed the news of the ceasefire and called on countries with influence on the groups fighting in Syria to provide the necessary support for the ceasefire to last.

Speaking in the Turkish capital Ankara later on Thursday, representatives of Syria’s High Negotiations Committee (HNC) said the rebels would abide by the truce but would retaliate against violations by Syrian government forces and their allies.

The HNC is an umbrella group representing Syria’s political and armed opposition factions, including the Free Syrian Army (FSA).

Usama Abu Zeyd, the FSA’s spokesman, said the rebels had had no direct talks with the Syrian government or Iran during the truce talks and insisted that Assad would have no place in the future of Syria.

Abu Zeyd confirmed that the truce excluded ISIL, also known as ISIS, and the main Syrian Kurdish armed group, the Kurdish Popular Protection Units (YPG), but did not specify whether Jabhat Fateh al-Sham was also excluded.

Though the ceasefire is being described as “nationwide”, fighting could very well continue in the areas under the control of ISIL and the other groups excluded from the ceasefire – Idlib, in the northwest, and the outskirts of Damascus, for instance.

The group “has presence in areas where moderate rebel groups are operating – around Aleppo, Idlib and on the outskirts of Damascus.

“If the Russians and the Syrian government decide to target the positions of [Jabhat Fateh al-Sham], the potential for casualties among other groups is going to be high”.

Syrian government forces and allied paramilitaries entered the eastern part of Aleppo city a week ago after the last residents and opposition fighters were evacuated from the enclave under a Turkish-Russian deal.

The pull-out gave Assad’s forces full control over Aleppo, which had been divided between his government and opposition fighters since 2012.

In his announcement from Moscow, Putin sounded a cautionary note, making it clear that the ceasefire deal was a work in progress.

“The agreements reached are, no doubt, very fragile and they demand special attention and follow-up in order to keep them and develop them,” he said.

Nour Hallak, a civil society activist based in Idlib, said there is some “hope” among Syrians because the latest ceasefire “includes all the factions”.

“When we started to hear about the ceasefire, we felt that it may be for real this time,” he told Al Jazeera by Skype, alluding to the previous failed truce attempts.

In a statement on Thursday, Staffan de Mistura, the UN special envoy to Syria, said he “welcomes” the ceasefire deal and expressed hope that it will “will save civilian lives, facilitate the delivery of humanitarian assistance across Syria, and pave the way for productive talks in Astana”.

De Mistura estimated in April that more than 400,000 Syrians had been killed since 2011. 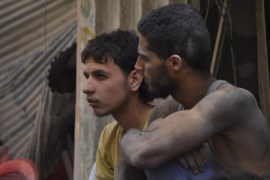 UN estimates only 6,250 of Yarmouk’s nearly 200,000 residents remain as siege and clashes take their toll.