Philippines President Rodrigo Duterte has described as “encouraging” his phone call with US President-elect Donald Trump, whom he said was understanding of his bloody war on drugs.

“I could sense a good rapport, an animated President-elect Trump. And he was wishing me success in my campaign against the drug problem,” Duterte said in comments his office released on Saturday.

Trump’s seven-minute chat on Friday with the Philippine president follows months of uncertainty about one of Washington’s most important Asian alliances, stoked by Duterte’s hostility towards President Barack Obama and repeated threats to sever decades-old defence ties.

OPINION: Are US allies in Southeast Asia defecting to China?

Duterte’s anger was unleashed following Obama’s concerns about possible human rights abuses in his war on drugs, during which more than 2,000 people have been killed.

The Philippine leader said Trump was “sensitive” and understanding about his crackdown and was encouraged by what he interpreted as Trump’s indication that he would not interfere.

“He understood the way we are handling it … I supposed that what he really wanted to say was that we would be the last to interfere in the affairs of your own country.”

He added: “We are doing it as a sovereign nation, the right way. And he wishes us well. And I said that, well, we assured him of our ties with America.”

‘Separation’ from the US

His special adviser, Christopher Go, had earlier said in a text message to media that Trump had invited Duterte to visit the White House next year.

There appeared to be confusion, however. Duterte mentioned an invitation to Washington and New York, and that Trump asked him to notify him of his presence “if I’m around”.

A statement issued by Trump’s transition team made no mention of that. It said the two men “noted the long history of friendship” between their countries and would work closely on “matters of shared interest and concern”.

Duterte made waves when he visited China in October and announced his “separation” from the US.

In five months in office, he has upended Philippine foreign policy by berating the US and pursuing a new alliance with Russia and also China, with which Manila has a history of bitter disputes.

Duterte told Democrat Obama to “go to hell” and called him a “son of a bitch” whom he would humiliate if he visited the Philippines.

Despite his optimism about Trump’s win, it has not stopped Duterte railing against what he calls a US history of “hypocrisy” and “bullying” worldwide.

Republican Trump told Reuters news agency during his campaign that Duterte’s comments about Obama had showed “a lack of respect for our country”. But he also stressed the “very important strategic location” of the Philippines. 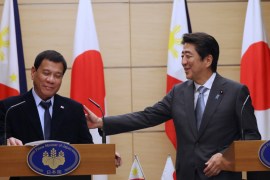 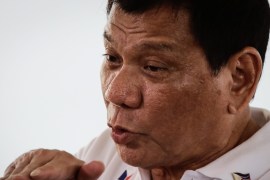 Philippine president suggests he may turn to Russia and China for weapons after the US halts sale of 26,000 rifles.