The comments by Gilad Erdan, Israeli public security minister, came in advance of Kerry’s speech on Wednesday at the Department of State in Washington DC to lay out a vision for how peace can be achieved in the region.

The remarks are the latest in a bitter exchange following the US refusal to veto a UN Security Council resolution last week that called on Israel to halt all settlement activity in the occupied West Bank and East Jerusalem.

Plans by France to hold an international Middle East peace conference on January 15 are another point of worry for Israel.

INTERACTIVE: The journey from Nazareth to Bethlehem, today

In a radio interview on Wednesday, Erdan said Kerry’s speech was part of a broader effort to hinder the incoming administration of Donald Trump, who has indicated he will have much warmer relations with Israel.

“This step is a pathetic step. It is an anti-democratic step because it’s clear that the administration and Kerry’s intention is to chain President-elect Trump,” Erdan told Israel Army Radio.

By declining to use its veto at the Security Council, the US enabled the adoption of the first UN resolution since 1979 to condemn Israel over its settlements policy.

Netanyahu reacted angrily, accusing the Obama administration of being behind the resolution and pledging not to abide by it.

Al Jazeera’s Kimberly Halkett, reporting from Washington DC, said there were high expectations for Kerry to defend the US position on the UN vote.

“We’ve seen how Kerry has been a serial negotiator throughout his term, but of course his efforts to negotiate some sort of peace agreement between the Israelis and the Palestinians collapsed in 2014,” she said.

“We believe there will be a bit of a defence in terms of the critiques of the US position.”

Kerry mediated a nine-month round of peace talks that broke down in early 2014 with little progress.

The timing of his speech, in the last 23 days of the Obama administration, has also raised questions about its impact.

“One wonders what is the point of an administration that has had eight years to get it right and has chosen to do absolutely nothing except systematically indulge Israeli aggression and expansionism,” Mouin Rabbani, a senior fellow at the Institute of Palestine Studies, a non-profit think-tank based in The Hague, told Al Jazeera.

“My only concern is that Kerry will use his speech to try to water down some of the very clear statements made in the Security Council resolution.”

Against this backdrop of diplomatic tension, an Israeli committee delayed a vote on Wednesday on permits for Jewish settler homes in Israeli-occupied Palestinian territories at Netanyahu’s request, reportedly to avoid more conflict with the US.

Hanan Rubin, a Jerusalem city councillor and a member of the planning committee that was to discuss the permits, told AFP news agency its members had been informed of Netanyahu’s request by the committee chairman.

“We were told by the chairman … that it was pulled at the request of the prime minister so we can avoid a conflict with the US government just before Kerry’s speech tonight,” Rubin said.

OPINION: UN settlement resolution is too little and too late

Obama’s administration has long expressed frustration with settlement building in East Jerusalem and the West Bank, which Israel occupied in 1967.

Settlements are considered illegal under international law, built on Palestinian land that some see as part of a future state with East Jerusalem as the capital.

Trump, who had called for the US to veto the resolution, chided the Obama administration again on Wednesday for its stance toward Israel.

“We cannot continue to let Israel be treated with such total disdain and disrespect. They used to have a great friend in the US, but … not anymore,” Trump wrote on Twitter.

“The beginning of the end was the horrible Iran deal, and now this (UN)! Stay strong Israel, January 20th is fast approaching!” he added, referring to the date of his inauguration as president.

The Israeli government has welcomed Trump’s election, with key members of Netanyahu’s coalition calling for an end to the idea of a Palestinian state, the basis of years of negotiations. 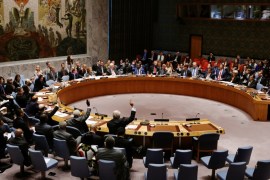