But the practice is causing serious tension in some communities. There have been protests forcing couples to cancel or postpone their ceremonies.

At one gurdwara, or temple, in the English midlands, 55 protesting Sikh men were determined to stop a wedding between a Sikh and a Hindu in September.

WATCH: Inside the little-known kitchen of Afghanistan’s Sikhs

Armed police surrounded the temple and arrested the group; two have since been charged. There have been many similar incidents across England in recent years.

“We’re not against any interfaith, out-of-faith wedding, people can go to register offices,” said Deepa Singh, who was among the 55 arrested. “In a religious building, you have to understand the religious buildings and the guidelines.”

He said he will continue disrupting weddings at temples which allow mixed-faith couples to perform the Sikh marriage ceremony, or Anand Karaj.

The Sikh Council, the largest body of British Sikhs, has ruled that temples should not stage mixed-faith weddings, but its advice is vague and calls for an end to protests.

“At a time when people associate, or some people associate, beards and turbans with religious fundamentalism, this isn’t the correct way of protesting,” said Nav Sawhney, a Sikh man engaged to be married to Robin, who is not Sikh. “What would be good would be an open dialogue, take off your balaclavas, and let’s all find common ground.” 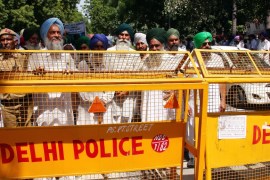 Rights groups aim to build pressure on government to ensure justice for victims of deadly attacks on the Sikh minority.