An unusually long-lasting bank of sea fog has been wandering over the waters of the Gulf. This has invaded all Gulf countries in the past few days, causing travel delays.

Cold air has been drawn down in a series of chilling outbreaks from just west of the Urals. This brought winter to the Levant, thundery flooding to Iraq and snow to Iran.

Cold air over warm water causes evaporation until the point where the air will take no more. At this point, fog forms and if the wind is light, it hangs around as a fog bank.

Every night as temperatures drop inland, the fog creeps in. If you are lucky, daytime heat will send it back into the Gulf again.

Qatar and Bahrain have been affected daily since December 24, with visibilities down below 50 metres.

Doha city centre has had only about three hours of clearance daily.

The fog has been expanding southwards and lapped into Ras al-Khaimah, Dubai and Abu Dhabi on Thursday.

Traffic delays and some accidents have been the result, along with flight delays as runway visibility dropped to 20 metres.

There is every chance that this fog will continue breathing in and out of these Gulf countries until the end of the year. 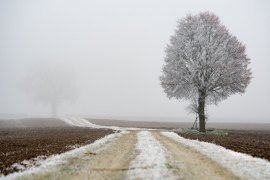 Low visibility causes cancellations of trains and flights in Asia and Europe affecting millions of people.

It can be quite beautiful, but can also lead to major complications 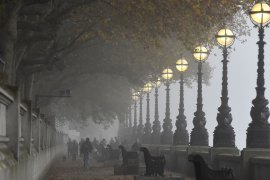 Thick fog across much of Britain caused travel disruptions on Monday with 10 percent of flights cancelled from London Heathrow, Europe’s busiest airport. The Met Office said the fog could reduce visibility to less than 100 metres. Heathrow said around 45 flights had been cancelled, while London City, Manchester, Leeds Bradford, Glasgow, Belfast, and Cardiff […]