A flight recorder has been found in the wreckage of a Russian military plane that crashed into the Black Sea on Sunday, killing all 92 on board.

Russia’s defence ministry confirmed on Tuesday that it has found a flight recorder.

“The main black box was found at 5:42am Moscow time, 1,600 metres from the shore at a depth of 17 metres,” news agencies quoted the ministry as saying.

The ministry said the flight recorder, which has been flown to a lab outside Moscow for analysis, did not sustain considerable damage.

It said the device will need to be cleaned in distilled water before experts can begin to retrieve data that could help identify the cause of the crash.

Investigators have so far said that pilot error or a technical fault were likely to have caused the defence ministry Tu-154 to come down.

It was not likely that a “terror attack” was behind the crash, Russia’s federal security service has said.

The plane was carrying dozens of members of the Alexandrov Russian Army Song and Dance Ensemble, known as the Red Army Choir, to Syria to entertain Russian troops in the run-up to the new year.

Other passengers included military officers, journalists and popular charity worker Yelizaveta Glinka, also known as Doctor Liza, who had been flying with a cargo of medical supplies for a hospital in the coastal city of Latakia.

The Tu-154 jet went down on Sunday morning minutes after taking off from Sochi’s airport, where it had stopped to refuel after flying out from the Chkalovsky military aerodrome in the Moscow region.

At least 13 bodies have been recovered from the sea so far.

Transport Minister Maxim Sokolov said some of the bodies could have already been carried off by the “strong current” to Abkhazia, the separatist region of Georgia, and some of its own rescue workers have joined the search operation.

The Interfax news agency cited an unnamed source as saying Russia had grounded all TU-154 planes until the cause of Sunday’s crash became clear.

Tu-154 aircraft have been involved in a number of accidents in the past, including the April 2010 crash killing then-Polish president Lech Kaczynski and his delegation. They are no longer used by commercial airlines in Russia. 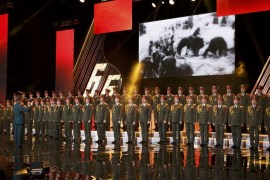 The Alexandrov Russian Army Song and Dance Ensemble lost 64 members, all but three of its choir singers, in the crash. 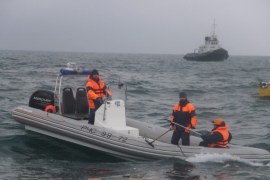 Kremlin: Terrorism not likely cause of Tu-154 crash