Thousands of pilgrims and tourists from around the world, together with local Christians, have gathered in the biblical town of Bethlehem in the occupied Palestinian territory of West Bank to celebrate Christmas Eve in the traditional birthplace of Jesus.

Security was tight in Bethlehem on Saturday after recent deadly attacks on Christian targets in neighbouring Egypt and Jordan by armed fighters.

Yet the faithful braved the chilly weather outside the town’s Manger Square, as traditional Christmas songs like Jingle Bells played in Arabic over loudspeakers and scout groups paraded with bagpipes and sang carols.

Tourists and local Christians alike wandered around the square illuminated by festive red and golden lights and a large Christmas tree, visiting souvenir shops and restaurants.

Christmas festivities have brought a boost of holiday cheer to Christians in the Holy Land, who make up just a small percentage of the population.

The region has experienced a wave of Israeli-Palestinian bloodshed that erupted over a year ago. The violence has tapered off in recent months, but has not halted completely.

Al Jazeera’s Andrew Simmons, reporting from Bethlehem, said there was a mood of optimism among the Palestinians there after the United Nations Security Council passed a resolution on Friday calling for an end to illegal Israeli settlements.

He said the Palestinians he met there were thankful for the move.

“Just down the road from the Church of the Nativity, there is a settlement of 25,000 Israeli homes,” he said.

“Palestinians say it stands in the way of Bethlehem and the occupied East Jerusalem. That, they say, is an obstacle to peace.”

Rula Maaya, the Palestinian tourism minister, said all the hotels in Bethlehem are fully booked.

“Bethlehem is celebrating today. We are receiving tourists from all over the world,” she said.

“All people over the world are looking at Bethlehem, so we hope more and more tourists will come during the year and that, next year, we will celebrate Christmas without occupation.”

Despite the Christmas cheer, Middle East politics looms large in the background: the concrete barrier that surrounds parts of Bethlehem is just one prominent reminder.

It was built by Israel last decade during the second Intifada, when Palestinian bombers attacked buses and cafes.

Israeli says the barrier is meant to keep out such attackers, but because it dips inside the West Bank, Palestinians see it as a land grab that also stunts their economy. 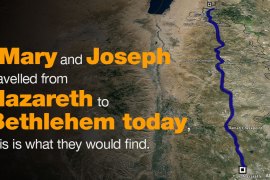 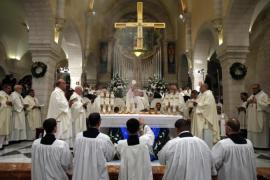