Tunisia has arrested the nephew of Anis Amri, the Berlin attack suspect, and two others linked to him, according to the North African nation’s interior ministry.

The three suspects – aged between 18 and 27 – were arrested in a police raid on Friday in the central province of Kairouan, where Amri’s hometown is located, the ministry said in a statement on Saturday.

Amri’s nephew has confessed to Tunisian authorities that he had been in contact with his uncle via Telegram, a messaging service, and that Amri had asked him to join the Islamic State of Iraq and the Levant (ISIL) group, the statement said.

The nephew has also said that Amri sent him money by post to enable him to travel to Germany, where the Berlin attack suspect was living at the time.

At least 12 people were killed when a truck drove into a Christmas market in the German capital on Monday.

Amri was killed in Italy’s Milan on Friday following a Europe-wide manhunt, prompting accusations of incompetence at German officials for allowing Amri to cross borders.

Germany’s top security official has denied charges that authorities bungled an investigation into Amri, who had also been watched by security officials previously as he was suspected of “terrorism” and plotting a robbery to steal arms.

“To speak about a failure by the security authorities would be inappropriate,” Thomas de Maiziere, interior minister, told Germany’s Bild newspaper on Saturday.

“However, we will, of course, analyse the case meticulously and release a corresponding report.”

Amri, a 24-year-old, had been living in Germany as an asylum seeker. He was killed after he pulled a gun and shot an Italian officer in the shoulder during a routine police check.

Hundreds of German investigators are now investigating how Amri managed to flee the country after the attack and whether he may have had accomplices or a support network that helped him escape.

ISIL, also known as ISIS, claimed responsibility for the attack.

In a video released by its Amaq website on Friday, a man it claims is Amri pledges allegiance to the head of the group and pledges revenge for Muslims.

Amri has been linked by German authorities to Abu Walaa, a preacher and the suspected head of an organisation that provided logistical and financial support to ISIL from western Germany.

Abu Walaa, an Iraqi national, was arrested in November.

A spokesman for the Berlin police said Saturday that there would be an increased presence of uniformed and plain-clothes officers on the city’s streets over the Christmas holidays.

The 12 victims of Monday’s attack include seven Germans, as well as an Italian, a Czech, a Ukrainian, an Israeli and a Polish national. 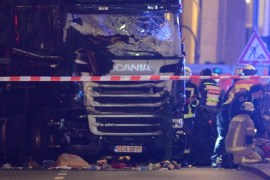 Why is Germany being targeted?

ISIL claims the Christmas market attack in Berlin and the far right blames Chancellor Merkel for her refugee policy. 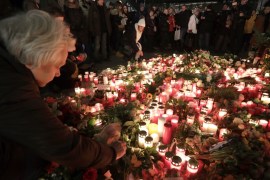 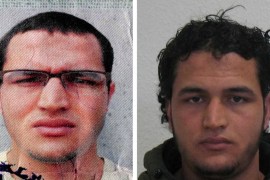