A recently formed rebel group in the Central African Republic (CAR) is wreaking havoc in the western half of the country, displacing thousands and emptying towns and villages in a country already hit hard by instability.

The Return, Reclamation, Rehabilitation group, or 3R, was formed in late 2015 and has displaced at least 30,000 people in the Ouham Pende region in CAR, debilitating relief efforts in the region, the United Nations told Al Jazeera on Thursday. 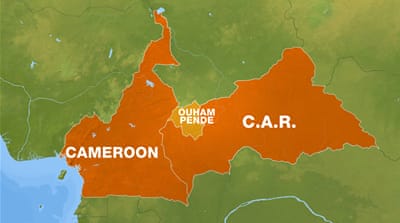 “Approximately 15,000 fled [from Koui in Ouham Pende] to the neighbouring town of Bocaranga and another 15,000 have not been identified yet … they sought refuge in the bush and along the axis leading to Bocaranga,” Yaye Nabo Sene, spokesperson at the UN Office for the Coordination of Humanitarian Affairs in the capital, Bangui, said.

Sene said that overall, some 70,000 people have been displaced across CAR since September, due to ongoing clashes between armed groups vying for regional control.

The UN’s comments come two days after Human Rights Watch (HRW) described the emergence of a new rebel group operating in the western parts of the country.

The watchdog accused the group of killing at least 50 people and displacing another 17,000 in a series of campaigns launched across the region between November 21 and 27. Two months earlier, the group allegedly raided the town of De Gaulle, killing 17 people and raping up to 43 women and girls.

The emergence of 3R comes at a time of rising tensions and insecurity in the towns of Kaga-Bandoro, Bria, and Bambari.

The 3R group was initially formed to protect the minority Puehl population from attacks by Christian Anti-Balaka militias and is reportedly made up of mostly Muslim cattle herders.

According to Lewis Mudge, Africa researcher at HRW, the group now has hundreds of well-armed fighters who control territory near Cameroon’s border.

While details about the new group remain vague, Mudge says early research suggests “a sectarian dimension to the fighting insomuch as 3R is a result of violence perpetrated against Muslim Peuhl by the Anti-Balaka.

“However, as with the rest of the crisis, things do not fit into neat categories. Based on our research, 3R’s claim to be protecting Muslims is a pretext. They seem to be a Cameroonian or Central African group whose real goal is to profit from the crisis,” Mudge said.

Likewise, Richard Moncrieff, Central Africa Project Director of International Crisis Group (ICG)  based in Nairobi, said that armed groups “tend to pick up on grievances of a community, many of which are quite legitimate. But this does not mean they in any way ‘represent’ that community”.

Former President Francois Bozize was deposed in a move that prompted a series of reprisal attacks from Christian and animist militia.  Both Anti-Balaka and Seleka groups have been accused of widespread human rights abuse against civilians, including murder, sexual violence, and mass displacement.

CAR has seen intermittent violence over the past three years. Despite the gains and installation of a new government in February, violence remains cyclical.

“It is now becoming apparent that the election of the start of the year did little to solve the underlying issues that have allowed armed groups to take hold – a criminalised economy, widespread exclusion and social grievance and a total incapacity of the state to impose its will,”  Moncrief told Al Jazeera.

UN officers reportedly told HRW on November 26 that they “are trying to conduct as many patrols as possible with the combat-ready men they have, but admit that both the 3R and Anti-Balaka are emboldened to circulate freely with their guns”.

Bangui is seen as relatively secure with the majority of the UN mission stationed there. But rural areas remain mostly lawless and ruled by a litany of armed fighters, known to tax and harass the civilian population.

As recently as October, tensions in the town of Kaga Bandero in northern CAR led to the suspension of humanitarian work in the area.

More than 20,000 people were forced to flee to a UN base to seek safety and shelter after an IDP camp in the town was attacked.

The UN says that the relief efforts in CAR remain underfunded; only 36 percent of the 2016 Humanitarian Response Plan was financed.