Israeli forces have shot dead a Palestinian teen during clashes that erupted when soldiers arrived to demolish the home of an alleged attacker.

Soldiers opened fire on a crowd and fatally hit Ahmad al-Kharoubi, a 19-year-old Palestinian, during clashes with youth before dawn on Thursday in occupied East Jerusalem’s Kafr Aqab neighbourhood.

Including Kharoubi, the Al-Haq human rights organisation has documented the killing of at least 107 Palestinians by Israeli security forces or settlers.

An Israeli army spokesperson said the soldiers were sent to raze the home of Misbah Abu Sbeih, a 39-year-old Palestinian who was killed by Israeli security forces after he carried out a drive-by shooting on a police station in East Jerusalem, leaving an Israeli woman and a police officer dead.

“In response to the threat, forces fired towards the suspect throwing an IED, resulting in his death.”

At least nine Israeli civilians were killed by Palestinian assailants between January and October of this year, according to United Nations statistics.

“Impunity is continuing,” he said, pointing to the case of Israel Shomer, an Israeli soldier who was acquitted after he shot dead 17-year-old Muhammad al-Kusbeh near a military checkpoint between Jerusalem and Ramallah in 2015.

According to the Israeli rights group Yesh Din’s most recent statistics, only 3.5 percent of legal complaints about Israeli soldiers harming or killing Palestinians led to an indictment in 2014.

“We believe that the Israeli judicial system is not impartial when it comes to the rights of the Palestinians,” Elayyan added.

“This system is part of the occupation enterprise in general. The goal of these so-called investigations is to shield perpetrators.”

The UN Office for the Coordination of Humanitarian Affairs documented the destruction of at least 986 Palestinian-owned structures between January and October of this year. At least 1,501 people were displaced during that period.

In addition to Syrian and Lebanese land, Israel has occupied the West Bank, including East Jerusalem, and the besieged Gaza Strip since the 1967 Middle East war.

More than half a million Israelis live in Jewish-only settlements – considered illegal under international law – throughout the West Bank and East Jerusalem, according to the Israeli rights group B’Tselem.

‘No attention on their actions’

Ibrahim Abrash, a writer and political analyst, said the wars in Syria, Iraq and Yemen resulted in the international community paying little attention to Israel’s killing of Palestinians and settlement expansions in 2016.

“Israel has it easy now with no attention on their actions,” he told Al Jazeera.

“The Palestinian Authority’s attempts to hold Israel accountable in the International Criminal Court have not produced results,” he explained.

“There’s no Palestinian strategy to face Israel, and they are focused on internal problems within and between Hamas and Fatah,” he said, referring to the two largest Palestinian political parties.

Abrash, who is based in Gaza, said he expects the election of Donald Trump as President of the United States to usher in a new period of relations between Israel and the US.

“The Trump stage will be very hard on Palestinians,” he said, citing the president-elect’s decision to appoint right-wing lawyer and pro-settlement figure David Friedman as ambassador to the US.

“All of this says that Washington is not a neutral broker between the two sides in peace talks.”

In September, US President Barack Obama signed an agreement to give Israel $38bn in military aid despite public spats between Obama and right-wing Israeli Prime Minister Benjamin Netanyahu. 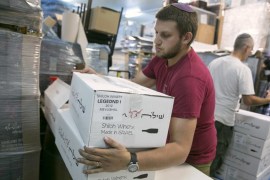 While the labelling guidelines prompted a rift between Israel and the EU, their economic effect is minimal. 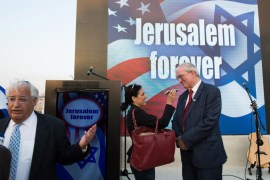 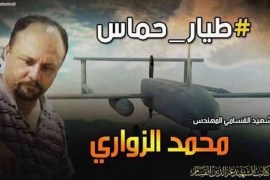