Germany has launched a Europe-wide manhunt for a “violent and armed” Tunisian man, saying he is a suspect in Monday’s Christmas market attack in Berlin.

But authorities are under fire after it emerged that the 24-year-old Anis Amri, a rejected asylum seeker, was potentially dangerous and already under investigation.

The interior minister of Germany’s most-populous North Rhine-Westphalia (NRW) state, Ralf Jaeger, said counter-terrorism officials had exchanged information about Amri, most recently in November, and a probe had been launched suspecting he was preparing “a serious act of violence against the state”.

Berlin prosecutors said Amri had been suspected of planning a burglary to raise cash to buy automatic weapons, “possibly to carry out an attack”.

On Thursday, Germany’s interior minister Thomas de Maiziere said that Amri’s fingerprints were found inside the cabin of the truck that ploughed through the market, killing 12 and injuring dozens, adding that there was a “high probability that the suspect is the perpetrator”.

After keeping tabs on him from March until September this year, authorities failed to find evidence of the robbery plot, and the surveillance was stopped.

Jaeger said Amri appeared to have arrived in Germany in July 2015 and his asylum application had been rejected.

He seemed to have used different names and had mainly lived in Berlin since February, but was recently in NRW, Jaeger added.

On Wednesday, police searched a refugee centre in Emmerich, western Germany, where Amri stayed a few months ago, as well as two apartments in Berlin, local media reported.

The prosecutors are also offering a €100,000 ($104,000) reward for information leading to Amri’s arrest and warning he “could be violent and armed”.

Germany has boosted security measures following the carnage, beefing up the police presence at train stations, airports and at its borders with Poland and France.

In Tunisia, Amri’s family expressed disbelief on hearing that he was wanted across Europe.

“I’m in shock, and can’t believe it’s him who committed this crime,” his brother Abdelkader Amri told AFP news agency … If he’s guilty, he deserves every condemnation.

“We reject terrorism and terrorists, we have no dealings with terrorists,” he added.

The apparent security failings in the case triggered fresh criticism of Chancellor Angela Merkel’s liberal refugee policy, which has seen over a million people arrive since last year.

Even within the chancellor’s own CDU party, voices of dissent are growing louder.

“Nationwide, there are a large number of refugees about whom we don’t know where they’re from or what their names are. And that’s a potential major security issue,” said CDU member Klaus Bouillon, the interior minister of Saarland state.

Al Jazeera’s Dominic Kane, reporting from the Christmas market in Berlin, said there was still a sense of shock in the area following the partial reopening of the market. 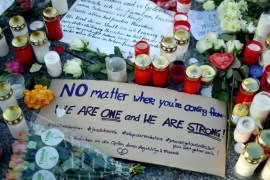 Reward of 100,000 euros offered by Germany for information on Anis Amri, who had previously been under surveillance. 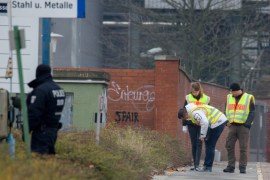 Perpetrator on the run after ramming truck through Berlin Christmas market, killing 12 and wounding dozens. 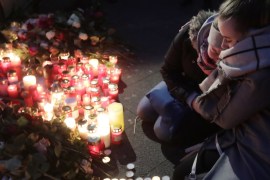 Attacker could still be on the run, Germany’s interior minister says following release of a Pakistani refugee suspect.