Vladimir Putin’s spokesman has described the murder of Russia’s ambassador in Turkey as a serious blow to Turkey, according to Russian news media.

Dmitry Peskov, the Russian president’s spokesperson, has been further quoted as saying that Turkish authorities should not rush with any theories on who is behind the assassination of Andrey Karlov before the investigation produces results.

“This is certainly a blow to the country’s prestige,” Peskov was quoted as saying on Wednesday by the RIA news agency.

Karlov was killed on Monday evening at a photography exhibition in Ankara by Mevlut Mert Altintas of the Turkish capital’s riot-police squad. He was then killed in a police operation.

Peskov said Russia did not believe Altintas acted alone, but refused to explain the reasons for the suspicion.

“We should not rush with any theories before the investigators establish who were behind the assassination of our ambassador,” he said.

Officials from both Russia and Turkey had said after the murder that they would work for mutual relations not to be affected.

Russia has flown a team of 18 investigators and foreign ministry officials to Turkey to take part in the inquiry. Karlov’s body and his family have been returned to Russia.

A senior Turkish government official told Al Jazeera on Monday that Turkey was focusing on possible links to what officials call the Fethullah Terror Organisation (FETO).

The network, led by self-exiled Turkish Muslim leader Fethullah Gulen, is accused by Turkey of orchestrating the July 22 failed coup, and is seen by the government of President Recep Tayyip Erdogan as a terrorist organisation.

Gulen has denied the accusations.

A Turkish official said on Tuesday evening that Mevlet Cavusoglu, Turkey’s foreign minister, spoke to John Kerry, US secretary of state, by phone and provided information on the assailant.

The official, speaking on condition of anonymity, said Kerry was told that both Turkey and Russia “know” that the network led by Gulen was behind the attack.

Turkey is pressing the US to extradite Gulen to Turkey to stand trial for his alleged role in the coup attempt.

During the phone call, Kerry raised concerns about “some of the rhetoric coming out of Turkey with respect to American involvement or support, tacit or otherwise, for this unspeakable assassination”, John Kirby, Kerry’s spokesperson, said.

“It is a ludicrous claim, absolutely false,” Kirby said.

Much of Turkey’s media, both broadcast and print, has reported claims that the assassin had links to the Gulen network, including reports of Gulen literature being found in his home, and of him having studied at a Gulen-run school.

For his part, Erdogan, speaking in Ankara on Wednesday, said: “There is no need to make a secret out of the fact [Altintas] was a member of FETO.”

He said the assassination showed Gulen supporters were still present within the security forces.

“We of course are continuing and will continue to carry out purges. We will do this with sensitivity.” 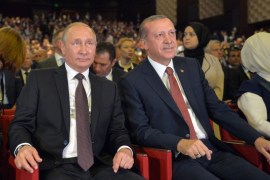 Russia and Turkey say the killing of Andrey Karlov in an Ankara art gallery will not derail reconciliation.