The number of people who were killed when a truck ploughed into a crowded Christmas market in Berlin has risen to 12, German police have said.

The truck on Monday rammed into the market outside the popular market at the Kaiser Wilhelm Memorial Church.

On Tuesday morning, Berlin police tweeted that investigators assumed the driver of the truck “deliberately steered into the crowd at the Christmas market”.

Ambulances and heavily armed officers rushed to the area, after the driver mounted the pavement of the market in a square popular with tourists.

Police later arrested the suspected driver near the scene, and said that another passenger “riding in” the truck had died. The truck had a Polish licence plate, police said.

He did not give further details in a post on Twitter on Monday night about the “shocking news” but added, “we are mourning with the relatives” of the victims.

Interior Minister Thomas de Maiziere said he was in constant touch with security authorities, but did not give any indication in a statement whether they believe the incident was an accident or an attack.

“We don’t yet have anything conclusive regarding the circumstances and the course of events,” de Maiziere told ARD public television, adding that investigators were working hard to put together all the pieces of evidence.

“I don’t want to use the word ‘attack’ yet, although a lot points to that,” the minister said.

Photos and video posted to social media showed rescue workers at the scene of the incident in the centre of Berlin where the truck had eventually stopped.

One social media user, Emma Rushton, said that people were “crushed”, and that the truck had been “going too fast” at around 60 kilometres per hour.

Bild newspaper posted a picture of a large Scania truck with its windshield smashed out on the pavement alongside the market.

“I’m deeply shaken about the horrible news of what occurred at the memorial church in Berlin,” Foreign Minister Frank-Walter Steinmeier said. “Many people who visited the Christmas market today have died and even more are injured.”

‘Images you don’t want to see’

Witness Jan Hollitzer told Al Jazeera that the truck drove about 50 metres through the market.

“It was really horrible, there were many casualties and injured people,” he said. “I saw people hit by the truck and also people under the truck … I can tell you those are images you don’t want to see.”

The truck was travelling “very fast” through a pedestrianised area, Hollitzer said.

Witness Mike Fox told the Associated Press news agency that the truck missed him by only about three metres as it drove into the market, tearing through tables and wooden stands.

“It was definitely deliberate,” said the tourist from Birmingham, England.

He said he helped people who appeared to have broken limbs, and that others were trapped under Christmas stands.

Czech and French authorities said they would beef up security in light of the incident.

The White House condemned “what appears to have been a terrorist attack” in Berlin.

US President-elect Donald Trump linked the attack to “Islamist terrorists”, saying “ISIS and other Islamist terrorists continually slaughter Christians in their communities and places of worship as part of their global jihad”, using an acronym for the Islamic State of Iraq and the Levant (ISIL). 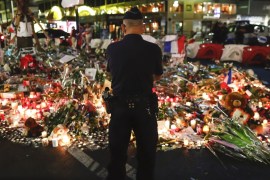 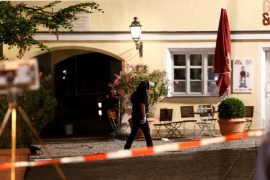