A passenger plane crashed near Pakistan’s capital of Islamabad earlier this month, killing all 48 people on board.

Rushing to flick the TV on to follow the developing story of the air crash, many Pakistanis were soon expressing shock and dismay: the quality of live coverage by TV stations brought back unpleasant memories of the last time a major breaking news was reported. And the time before that.

The Pakistan International Airlines (PIA) plane had crashed just before dusk in a remote, mountainous area. For the news media, that meant difficulty in gaining access to the site or finding witnesses for several hours after the accident.

The adversity, however, was quickly converted into an opportunity by the country’s broadcast media, which began filling the information vacuum with patently unverified news and questionable analyses.

It was obvious to Pakistanis that TV stations were resorting to inaccurate reporting, sensationalism and exaggeration in the absence of credible news and analysis.

Questions were being asked, once again, why poorly trained and possibly unqualified reporters, news anchors and newsroom staff had been put in charge of an extremely important story for 180 million people in Pakistan and hundreds of thousands more abroad.

“There is no doubt that a lack of training and understanding as well as disregard for journalism ethics is seen on TV,” Azhar Abbas, managing director of Geo News, told Al Jazeera.

“This is maybe because our media is not mature enough or there is this urge to compete not only among ourselves but also with the monster that is social media.

“However, at times there is so much pressure on the newsroom that you have to air unverified material. In operational situations, you have to take a call in order to compete and remain relevant. I’m not saying you shouldn’t try to verify news items, but these are operational decisions you have to make.”

While the news of the crash was still fresh, the hosts of a programme on an Urdu-language TV station dissected what they saw as the pitiable state of TV news coverage – the lack of journalistic ethics and the liberal use of on-screen animations for recreating events.

A few minutes later, the same TV station was airing an animated clip of a PIA aircraft – an incorrect model to boot – crashing and going up in flames.

This isint hard to understand. Ancient/old/unsafe planes should NOT be allowed to fly. This tragedy was due to negligence. #PK661

Meanwhile, other TV stations had tracked down aviation “experts” and given them free rein to float crash theories before any of the facts could be clearly established.

Kamal Siddiqi, a former editor of Pakistan’s Express Tribune newspaper and current director of the Centre of Excellence in Journalism, blames shoddy TV journalism on reporters, newsroom staff, editorial boards and the race for viewership ratings.

“In Pakistan, we have a very unusual situation – a flawed ratings system,” he told Al Jazeera.

“You have 40-odd news channels competing with each other. The minute one channel does something different or reports something, it gives them ratings – and journalists and reporters are told this is good work.”

Reporting from a grave

Earlier this year too, several Pakistan’s news outlets sparked outrage with their coverage of the death of Abdul Sattar Edhi, the country’s best known philanthropist.

In one instance, a TV reporter gained access to the grave prepared for Edhi and decided to jump into it to report from there.

“This, again, gives them ratings,” Siddiqi said. “They are not told it is wrong. Ratings brings money. But this is where it should stop.

“We need to train journalists about right and wrong. In many instances during our courses, we find out that not a single person is aware of media ethics. And that is very scary.”

In 2012, a passenger plane operated by Pakistan’s Bhoja Air crashed in its final approach into Islamabad, killing 127 on board.

A major news channel started off its coverage of the tragedy by calling it a “helicopter” crash. The “helicopter” became an “army aircraft” and a “cargo plane” in quick succession, all apparently based on unverified reports.

Live coverage of military operations while a part of Karachi airport was under siege by armed men; incitement of violence against the Ahmadiyya community during a live show; and disregard for the feelings of a recently bereaved family member are just three of the more egregious examples of violation of basic media-ethics codes.

Then there is the practice of broadcasting graphic scenes of violence and bloodshed with no prior warning, which calls into question the professional maturity of the newsroom staff making those decisions.

Pakistan’s media industry has witnessed an explosion of TV channels and fresh recruitments in the last 15 years.

From two channels in 2000 to more than a 100 now, the increase in outlets is forcing owners to recruit untrained and inexperienced staff, say experts.

Being a journalist in Pakistan is not easy. An International Federation of Journalists (IFJ) report released earlier this year put Pakistan fourth on the list of the deadliest countries in the world for journalists, with 115 journalists killed in the past 25 years.

The Committee to Protect Journalists (CPJ) has said journalists in Pakistan are under siege and asked the government to ensure their safety.

Abbas believes the lack of qualified individuals at the middle and lower levels as well as the absence of “filters” is causing things to get out of hand.

“There is lack of editorial control. Channels tend to compromise on integrity and authenticity to get more viewers. But while it’s easy to criticise mainstream media, you have to admit that every one of us loves sensationalism.”

So, could it be that news editors and media-business owners tacitly approve sensationalism on live TV?

Pakistan media predictably treating the plane crash as a battle for ratings, no consideration for the families who've lost loved ones#PK661

“Once, while in ethics training, a journalist told me ‘It is easy for you to talk but I can’t practise ethics on an empty stomach’,” Siddiqi said, adding that reporters were “told it was part of their job”.

“Right now, reporters don’t know whether or not to stop at a red light.”

Earlier this year, a female reporter from a local news channel was slapped by a guard at a government office in Karachi.

While the guard’s behaviour could not be condoned under any circumstances, a video clip widely shared on social media appeared to confirm the reporter’s disregard for authority and media ethics while on assignment.

But the fault, according to Siddiqi, lies also with the major media companies and the lack of initiative with regard to continuous professional training for journalists.

“We have a serious lack of understanding on how to handle news in crisis,” Abbas of Geo News says.

“At times, the reporter is not trained on what to say, especially in a sensitive situation or a tragedy, or how to talk to people or how not to raise his or her voice.

“The training done in the public sector, at universities, is out of sync with the industry. They say they do it for the ratings, but the ratings are not representative of what the viewers want.

“This is what we call a herd mentality: one starts and others blindly follow.” 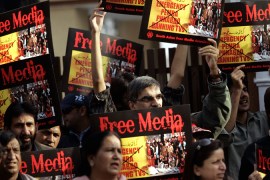 In Pakistan, a news media minefield

In the most dangerous place on Earth to be a journalist, the media’s problems are reflections of the state’s incapacity.