ISIL claimed responsibility for Monday’s truck attack on a Christmas market in Berlin, while German investigators said they were pursuing multiple leads.

The claim came at the end of a challenging day for German officials, who are still hunting for the person, or people, behind the incident.

ISIL, or the Islamic State of Iraq and the Levant group, announced the claim via its Amaq website late on Tuesday.

“A soldier of the Islamic State carried out the Berlin operation in response to appeals to target citizens of coalition countries,” said the ISIL statement, which was posted online.

The claim by ISIL, also known as ISIS, did not identify the attacker.

The truck attack on the Christmas market in the west of the city left at least 12 dead and another 48 injured, 24 of whom have been released from hospital, according to German police.

The claim of responsibility came not long after German prosecutors said they had released a man arrested on Monday night near the scene of the attack, initially suspected of driving the truck.

The man, a Pakistani refugee who came to Germany last year, had been arrested based on a description of a suspect who jumped out of the truck and fled.

German flags flew at half-staff and people placed flowers and candles at the site.

“The security officials are left with an extremely worrying situation,” she said. “You have an armed and dangerous person still on the loose, still at large, [which is] an extreme concern for police.”

She said there were currently more tourists in the city because of the Christmas holidays.

As attention switched to the manhunt, investigators asked the public to send them any photos and video footage.

German officials, including Chancellor Angela Merkel, have called the incident a “terrorist” attack.

“We just heard about the supposed claim of responsibility by this so-called Islamic State that is, in fact, a gang of ‘terrorists’,” he told ARD, German public broadcaster.

“There are several leads that investigators are following now.” 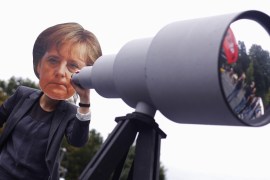 Is Big Brother coming to Germany?

In a place where government surveillance raises the spectre of a totalitarian past, some fear rights are being violated. 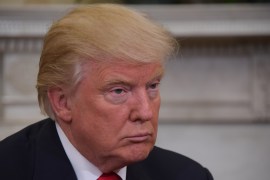