Tens of thousands of Muslims are rallying in the Indonesian capital, Jakarta, against the city’s Governor Basuki Tjahaja Purnama, who is accused of insulting the Quran.

Protesters chanting, praying and carrying banners gathered at the National Monument in central Jakarta on Friday demanding that Purnama, an ethnic Chinese Christian popularly known as Ahok, be jailed on blasphemy charges.

Purnama, a long-term ally of President Joko Widodo, is being investigated over comments he made about his opponents’ use of the Quran in campaigning. He denies wrongdoing but has apologised for the remarks.

Police on Thursday handed over a dossier from their investigation of Purnama’s comments to prosecutors, who are expected to take the case of alleged blasphemy to court in coming weeks.

Police officials estimated that at least 150,000 people, including many who travelled to Jakarta from towns and cities across the island of Java, gathered on Friday under drizzling rain.

Some reports put the number of protesters at several hundreds of thousands.

National news agency Antara said 22,000 police personnel would be deployed to avoid a repeat of violence that flared during a protest last month when more than 100 people were injured in clashes with police.

Al Jazeera’s Step Vaessen, reporting from Jakarta, described the protest as “an extremely big show of force by Islamist groups who have been gaining importance in Indonesia over the years.

“It is basically a threat to the secular state here in the long run, with conservative Muslims getting more and more power on the ground”.

Widodo addressed the rally and praised the peaceful protest, before urging the crowd to leave safely.

“Thank you and safe travels on your return from where you came from. God bless you,” said Widodo, who has blamed “political actors” for exploiting the popular fury over Purnama to destabilise his government.

Our correspondent said Widodo, who lives right across from the protest site, in a surprise development walked towards the National Monument park to attend Friday prayers along with hundreds of thousands of protesters.

“Widodo wants to give a strong signal that he now understands that the protests have gone way beyond some radical groups. In fact, it’s a lot bigger now,” she said.

Purnama is running for re-election in February against two Muslim candidates.

The contest has generated high political tension for weeks, with rumours of plots to undermine Widodo and scupper his chances of winning a second term in 2019.

“Many people really feel hurt by what the governor said, but also religious sentiments are being creatively used by politicians to gain support ahead of regional elections,” Al Jazeera’s Vaessen said.

Police have warned against attempts to destabilise the government.

Rikwanto, police spokesperson, said 10 people who he identified only by their initials had been detained before dawn on Friday, citing articles of the criminal code that cover conspiracy and acts of treason.

Two of them were charged under the law of information technology for hate speech.

“They have now been detained and are undergoing investigation,” said Rikwanto, who goes by only one name.

Indonesia is home to the world’s biggest Muslim population but recognises six religions and is home to dozens of ethnic groups, some of which follow traditional beliefs.

Religious and ethnic tension last month prompted Widodo to rally top military, political and religious figures in a sign of unity amid fears of attempts to undermine the stability of his government.

The Jakarta government has put up signboards on major roads calling for national unity and displaying pictures of independence heroes who fought against colonial rule.

But opinion polls have shown him slipping into second place in the race for re-election as governor, a position that Widodo himself, who is popularly known as Jokowi, used as a stepping stone to the presidency. 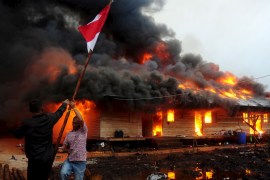