With Russia’s backing, the United Nations Security Council on Monday voted to quickly deploy UN observers to Aleppo to monitor evacuations and report on the fate of civilians who remain in the besieged Syrian city.

The council unanimously adopted the French-drafted resolution that marks the first show of unity in months among world powers grappling with the crisis in Syria.

The resolution calls for UN officials and others to be able to monitor evacuations from eastern Aleppo and the safety of civilians who remain in the Syrian city.

The 15-member council resolution “demands all parties to provide these monitors with safe, immediate and unimpeded access”.

Al Jazeera’s Mike Hanna, reporting from the UN headquarters in New York, said: “For the first time in numerous attempts to get unanimity on the situation on Aleppo, all of the 15 UN Security Council members have supported this resolution to send UN monitors in Aleppo.”

Russia had vetoed six similar resolutions before this one.

“What happens next is deployment of UN and aid organisation personnel to Aleppo,” Hanna said.

Syria’s UN ambassador, Bashar Jaafari, decried the resolution. He said that while Syria does not oppose UN Security Council resolutions that respect international humanitarian law, the resolution was “just another part of the continued propaganda against Syria and its fight against terrorists”.

He added that “the last terrorists in some districts of the eastern part of Aleppo are evacuating their strongholds and Aleppo this evening will be clean”.

OPINION: Reporting from the ground in times of war

Turkish foreign minister Mevlut Cavusoglu said on Monday that the evacuees from the besieged city were bused to an area under opposition control, in an ongoing effort to get people to safety.

WATCH: What are President Putin’s plans for Syria?

The offensive forced the opposition fighters out of most of their strongholds within weeks. 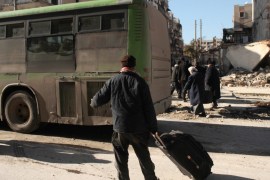 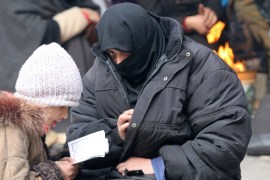 Buses begin leaving with civilians and rebels as part of deal, after some buses from two besieged villages were burned.