Lebanon acquired a new 30-minister government led by Saad al-Hariri, bringing together the entire political spectrum except for the Christian Phalangist party that rejected the portfolio it was offered.

The new cabinet, which was announced on state television on Sunday evening, will keep Gebran Bassil as foreign minister, Ali Hassan Khalil as finance minister and Nouhad Machnouk as interior minister.

The cabinet will also include Yacoub al-Sarraf as the new defence minister and Cesar Abou Khalil as the new energy and water minister, two of the other most important jobs.

“This is a government of entente,” Hariri said of the new line-up, formed six weeks after the election of President Michel Aoun .

New portfolios include an anti-corruption post and, for the first time, a minister of state for women’s affairs.

Hariri said the Phalangist Party had been offered a minister of state post but had turned it down.

The new government will have “at the top of its list of priorities to preserve security against the fires ravaging our region”, Hariri told reporters.

He stressed that the government would act to “preserve our country from the negative consequences of the Syrian crisis”.

On November 3, former prime minister Hariri was nominated to form Lebanon’s next government, but the process was seen as likely to be hampered by deep differences with Hezbollah, an influential Shia movement.

Hariri, 46, is anti-Syria and a fierce opponent of Hezbollah, members of which have been accused by an international court of involvement in his father’s 2005 assassination.

But he was forced to throw his support behind Aoun, their candidate for the presidency, in order to secure his return to power as prime minister.

Hariri’s government will have two ministers from Hezbollah.

His nomination and Aoun’s election after a two-year vacuum have raised hopes that Lebanon can begin to tackle challenges including a stagnant economy, a moribund political class and the influx of more than a million Syrian refugees .

Hariri also announced the establishment of a state secretariat for refugees, and called on the international community “to take responsibility for helping our country bear the burden”.

Lebanon is due to hold parliamentary elections in May 2017, the first legislative vote in eight years.

The current parliament – elected in 2009 – has extended its own mandate twice amid fierce disagreements over revamping Lebanon’s electoral law.

“The government will also work on the preparation of a new electoral law,” Hariri said on Sunday.

The thorny issue divides religious parties and communities in a country where politics is based on parity between Christians and Muslims. 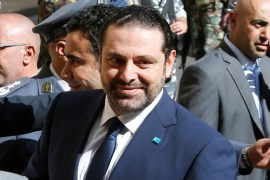 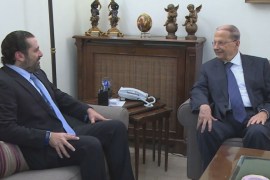 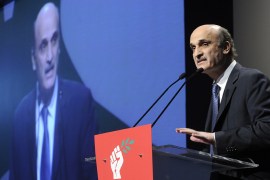