China’s Defence Ministry said it has been in talks with the United States about returning an underwater drone taken by a Chinese naval vessel in the South China Sea, but the US was not helping by “hyping up” the issue.

The drone was seized  on Thursday – one of the most serious incidents between the two militaries in years – about 50 nautical miles northwest of Subic Bay off the Philippines, just as the USNS Bowditch was about to retrieve it, US officials said.

“China decided to return it to the US side in an appropriate manner, and China and the US have all along been in communication about it,” the ministry said on its website.

“During this process, the US side’s unilateral and open hyping up is inappropriate, and is not beneficial to the smooth resolution of this issue. We express regret at this,” it added.

The Pentagon confirmed on Saturday that Chinese authorities agreed to return the drone.

“Through direct engagement with Chinese authorities, we have secured an understanding that the Chinese will return the UUV to the United States,” Pentagon spokesman Peter Cook said in a statement.

China’s Defence Ministry had said one of its naval vessels discovered a piece of “unidentified equipment” and checked it to prevent any navigational safety issues, before discovering it was a US drone.

According to the Pentagon, the unmanned vehicle was being operated by civilian contractors to conduct oceanic research. The US said it had issued a formal diplomatic complaint over the seizure and demanded the drone’s return.

“It is ours. It’s clearly marked as ours. We would like it back, and we would like this not to happen again,” Navy Captain Jeff Davis, a Pentagon spokesman, told reporters on Friday.

He said the drone costs about $150,000 and is largely commercial, off-the-shelf technology.

The USNS Bowditch, which is not a combat ship, was recovering two of the gliders when a Chinese ship approached, Davis said. The two vessels were within about 450 metres of each other.

According to the Pentagon, as the Chinese ship left with the drone, which is about three metres long, its only radio response to the US vessel was, “we are returning to normal operations”.

US President-elect Donald Trump blasted the seizure. Apparently misspelling “unprecedented”, he tweeted: “China steals United States Navy research drone in international waters – rips it out of water and takes it to China in unpresidented act.”

He later reissued the tweet, correcting the spelling to “unprecedented”.

Trump tweeted once again on the subject early on Saturday from his seaside resort club Mar-a-Lago in Palm Beach, Florida, where he plans to spend the holidays. He said Chine should “keep” the drone it “stole”.

We should tell China that we don't want the drone they stole back.- let them keep it!

The Global Times, a newspaper published by China’s ruling Communist Party, quoted retired Chinese admiral Yang Yi as saying China considered itself well within its rights to seize the drone.

“If China needs to take it, we’ll take it. [The United States] can’t block us,” Yang said. “It’s natural for us to take possession of and research for a bit these types of things that America sends to our doorstep.”

Bonnie Glaser, senior adviser for Asia at the Center for Strategic and International Studies, said the seizure of the glider occurred inside the exclusive economic zone of the Philippines, not China, and appeared to be a violation of international law.

Davis said the incident could be the first time in recent history that China has taken a US naval vessel.

Some observers have called it the most significant dispute between the sides’ militaries since the April 2001 mid-air collision between a US Navy surveillance aircraft and a Chinese fighter jet about 110km from China’s Hainan island that led to the death of a Chinese pilot.

Whatever the outcome, the incident is likely to fray the already tense relations between US and China.

There also have been increased tensions over Beijing’s ongoing military buildup in the South China Sea, mainly the development and militarisation of man-made shoals and islands aimed at extending China’s reach in the strategically vital area, through which about $5 trillion in global trade passes annually. 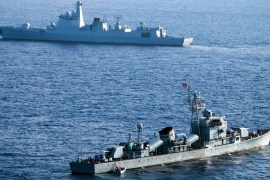 US officials demand return of the drone they say was testing salinity and temperature in international waters.