A senior Palestinian politician has condemned US President-elect Donald Trump’s choice of ambassador to Israel, David Friedman, a right-wing lawyer who has vowed to move the US embassy to Jerusalem.

Moving the US embassy from Tel Aviv before a final agreement on the Palestinian-Israeli conflict “will be the destruction of the peace process”, Saeb Erekat, secretary-general of the Palestine Liberation Organisation (PLO) told journalists on Friday.

Along with other Palestinian, Syrian and Lebanese territories, Israel has occupied East Jerusalem and the rest of the West Bank since the 1967 war and has built Jewish-only settlements throughout the territory in contravention of international law.

The West Bank-based Palestinian Authority says East Jerusalem should be the capital of a Palestinian state in any future two-state solution agreement.

Erekat warned of the potential outcome of moving the embassy and a change in the “long-standing position” of the United States that considers “the settlements as illegal”.

“I look David Friedman and Trump in the eye and tell them – if you were to take these steps of moving the embassy and annexing settlements in the West Bank, you are sending this region down the path of something that I call ‘chaos, lawlessness and extremism’,” he said.

In a Trump transition team statement on Thursday announcing his appointment, Friedman said he wanted to work for peace and looked forward to “doing this from the US embassy in Israel’s eternal capital, Jerusalem”.

A source in Netanyahu’s office told the AFP news agency that the premier was “pleased” with the appointment.

“He knows David Friedman has the full confidence of President-elect Trump and looks forward to working closely with him,” the source said, speaking on condition of anonymity.

“His knowledge and wisdom of the issues will strengthen the bridge between our great nations,” Hotovely said.

The US and most UN member states do not recognise Israel’s claim to all of Jerusalem as its capital.

Trump may not formally abandon US support for an eventual “two-state solution” but Washington will likely not press its Israeli ally to make difficult concessions to revive moribund two-state negotiations.

Trump’s spokesman Jason Miller said on Friday that Friedman had the president-elect’s full support and that the plan to move the embassy would stand.

More than 530,000 Israelis live in settlements in the occupied Palestinian territory, according to the Israeli rights group B’Tselem.

Netanyahu has vowed to continue settlement expansion. In March 2015, the day before Israelis re-elected him, Netanyahu promised to prevent the establishment of a Palestinian state on his watch.

OPINION: The delusion of a two-state solution in Israel-Palestine

Speaking to Al Jazeera, Ramy Abdu, of Euro-Mediterranean Human Rights Monitor, said that the UN regarded “any actions taken by Israel, the occupying power, to impose its laws, jurisdiction and administration” in East Jerusalem as illegal.

Referring to Trump’s recent statement that he would like to broker a lasting agreement between Palestinians and Israelis, Abdu said: “If he is sincere, then he is severely misinformed. There is no way to bring about a just or a lasting peace by being the first country in the world to legitimise Israel’s occupation of a city long regarded as the cultural and religious heart of Palestine.” 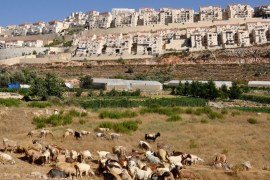 Palestinian leaders say Israel’s settlement movement is emboldened by the election of Donald Trump in the US. 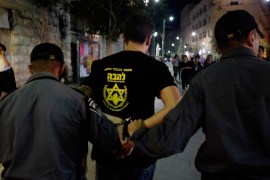