President Rodrigo Duterte has threatened to terminate a pact that allows US troops to visit the Philippines, reacting angrily to what he thought was a US decision to scrap a major aid package over human rights abuses.

A US government aid agency said this week that its board deferred a vote on a renewal of the development assistance package for the Philippines “subject to a further review of concerns around rule of law and civil liberties”.

Duterte, whose administration has been criticised by Washington over a bloody crackdown on illegal drugs, unleashed a barrage of expletives in response.

He said the Philippines can do without US aid, called Americans “sons of bitches” and “hypocrites,” while praising China for offering what he said was huge financial assistance.

According to a toll kept by Al Jazeera and other news sources, Duterte’s drug war has killed more than 6,100 people, including a handful of teenagers.

On Monday, Duterte declared that “fewer people are being killed” and “they are almost finished off anyway”.

Based on analysis of an official police report, 36 people on average have been killed every day during the 168 days of Duterte’s presidency.

The government insisted that those killed by police – more than 2,000 – died during legitimate anti-drug operations. The police also said that they were investigating other killings, which were carried out by unknown gunmen.

Duterte risks impeachment after admitting on Monday to “personally” killing criminals when he was the mayor of Davao City, two Philippine senators said on Friday.

The president boasted to business leaders that as Davao City mayor he used to prowl the streets on a motorcycle looking for “an encounter to kill”, just to show to local law enforcers he was able to do so.

INFOGRAPHIC: Who’s liable for the mounting death toll in the Philippines?

“It’s like a hyperbole, that’s the president, he is used to exaggerating just to put his message across,” Aguirre was quoted in radio reports as saying on Thursday.

Even if that were true, Aguirre said it did not necessarily mean that he violated the law.

“It could be done with a justifiable cause and justified circumstances as a public officer in order to arrest, but if they resisted. He must have been forced,” Aguirre said, referring to Duterte. 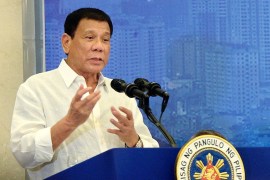 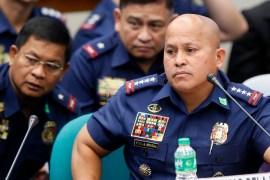 Tough-talking president says he’s willing to go to jail for policemen accused of “rubbing out” a drug-linked mayor. 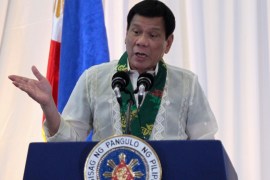