Thousands of civilians and rebels are still waiting to leave the last remaining rebel-held pockets of eastern Aleppo under an evacuation deal that will allow Syria’s government to take full control of the city after years of fighting.

The operation launched on Thursday and is expected to take several days.

Zouhir Al Shimale, a journalist in eastern Aleppo, said the evacuation was moving at a snail’s pace.

“People were outside in the street overnight,” he said, adding that the temperature had dipped below zero degrees celsius in the city.

“Thousands are still waiting out here.”

US Secretary of State John Kerry has warned that action is needed to prevent a potential massacre.

The first convoys left Aleppo carrying wounded civilians, fighters and their families, with civilians mostly leaving on buses and ambulances.

The Russian defence ministry said on Friday morning that more than 6,000 people, including 3,000 rebels, had left east Aleppo in the last 24 hours.

OPINION: Five years on, we must seize sliver of hope for Syria

The withdrawal began a month to the day after Syrian government forces launched a major offensive to retake all of Aleppo, and will hand the Syrian President Bashar al-Assad his biggest victory in more than five years of civil war.

The city, Syria’s second largest city and once a key cultural and economic hub, has been divided between government forces and rebels since 2012.

In a video message to Syrians, Assad said the “liberation” of Aleppo was “history in the making”.

Kerry said what had already happened in the city was “unconscionable” but warned over the fate of “tens of thousands of lives that are now concentrated into a very small area of Aleppo”.

“And the last thing anybody wants to see … is that that small area turns into another Srebrenica,” he said, referring to the 1995 Bosnian war massacre.

UN envoy Staffan de Mistura said on Thursday that around 50,000 people were still trapped, including 40,000 civilians.

The evacuations were announced on Thursday, after an initial plan for civilians and fighters to leave rebel-held parts of the city collapsed the previous day amid renewed clashes.

They began with a convoy of ambulances and buses crossing into a government-held district in southern Aleppo in the afternoon.

A first evacuation attempt on Wednesday fell apart, with artillery exchanges and resumed air strikes rocking the city until the early hours of Thursday.

The defence ministry in Moscow said Syrian authorities had guaranteed the safety of the rebels leaving the city.

The head of the UN-backed humanitarian task force for Syria, Jan Egeland, said in Geneva that most of those evacuated from Aleppo would head to opposition stronghold Idlib, in Syria’s northwest.

De Mistura however warned that “Idlib will become the next Aleppo” if a ceasefire and political agreement for Syria is not found.

AlHakam Shaar, a research fellow at the Budapest-based Aleppo Project, an initiative that tracks the destruction in the historic city, described the deal as the final phase of a “mass depopulation”.

“Any sustainable peace agreement in Syria will have to guarantee free return for the displaced, females and males, along with their civil society formations,” he told Al Jazeera.

“A return to centralised, authoritarian governance under the Syrian government is likely to again sideline the population that was very marginalised before 2011.” 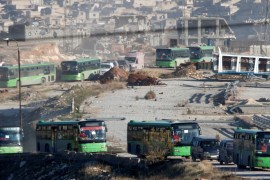