Russian President Vladimir Putin headed home from Tokyo with promises of economic cooperation, but did not indicate that there was a possibility of handing back the four islands which were seized by the Soviet Union in 1945.

Putin and Japan Prime Minister Shinzo Abe wrapped up two days of talks on Thursday with numerous economic deals but no big breakthrough on a territorial row. Rather, the two leaders agreed to launch talks on joint economic activities on the disputed islands, the two sides said in a joint statement.

Putin said that the islands, known as the Southern Kurils in Russia and the Northern Territories in Japan, should be seen not as a point of contention but “a place that brings Japan and Russia together”.

The Soviet Union seized four islands off Japan’s northern coast in 1945 in the closing days of the war, expelling 17,000 residents to nearby Hokkaido, the northernmost of Japan’s four main islands.

“There must be an end to this historic ping-pong,” said Putin. “The fundamental interests of Russia and Japan require a long-term deal.”

The Japanese prime minister said the effort for getting the islands back would continue despite the “difficult path ahead”.

“Concluding a peace treaty that has not been concluded in more than 70 years is not easy,” Abe said. “But we cannot resolve this issue only by asserting the correctness of each other’s claims.”

Few believe Putin is likely to hand the islands back, not least because of their strategic value sitting astride the entrance to the Sea of Okhotsk.

“There are security issues,” Putin said. “We have two naval bases in Vladivostok, from where our ships go out to the Pacific. We’d like the Japanese side to take all these concerns into account.”

Russian officials said the two sides had signed a total of 80 documents, including 68 on commercial matters, during Putin’s visit, including private-sector deals.

The Japan Bank for International Cooperation and the Russian Direct Investment Fund signed an agreement to set up a $1bn investment fund to promote economic cooperation between the two countries.

READ MORE: The Kurils – A difficult life on the disputed islands

Despite strong pressure from the Abe administration, companies remain wary of the risk of doing business in Russia, said a Japanese official involved in summit preparations.

“Hence many of the agreements being announced are vague memorandums of understanding,” he said.

As the two leaders held their second round of talks, right-wing activists in trucks mounted with loudspeakers circled the streets not far from the prime minister’s office, blaring “return the islands” and “Putin go home”.

Japanese opposition politicians were quick to criticise the talks.

“How is this economic cooperation and these joint economic activities going to lead to a settlement of the islands issue?” said Ren Ho, head of the main opposition Democratic Party.

“There are still concerns that economic cooperation will not help Japan. Also, no concrete way to make any progress on the islands was found and that is really bad,” she added in a statement. 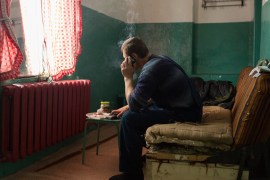 The Kurils: A difficult life on the disputed islands

Locals say life is tough and development slow as Russian and Japanese leaders fail to come to agreement over dispute.