When the Syrian revolution broke out in March 2011, Aleppo natives Sabri Cheikhou and Ziad Najjar were quick to throw caution to the wind and joined anti-government demonstrations outside the Syrian embassy in London.

Imbued by the revolutionary fervour spreading across the Arab world, the pair paid little attention to the Baathist apparatchiks inside the building dutifully filming the protesters who had turned up.

Such intimidatory tactics to police Syrian dissidents abroad had once instilled fear among Arab dissidents, but would no longer hold sway over them, the two explained.

“After the revolution started there was no need to hide our faces, everything was out in the open,” Cheikhou told Al Jazeera at a coffee shop in one of North London’s Arab enclaves.

“There was nothing else they could do to scare us,” Najjar added.

The men are from Aleppo’s Salahudeen district, the last rebel holdout in the city, and the scene of efforts to evacuate civilians and rebel fighters to nearby opposition areas.

Both are supporters of the campaign to oust Syrian President Bashar al-Assad and rued the rebel setback, but weighing heavier on them was disbelief that such destruction was happening to their home town.

“I can’t get around the idea that if I go back everything I know has been destroyed,” Najjar said.

“There are landmarks we recognise but some places we know are just rubble … It breaks my heart.”

Cheikhou described how he avoided images of the fighting and instead focused only on the positive memories he had of the city.

and I live within those images”]

“I have these sweet images and I live within those images,” Cheikhou said.

“Even though the reality is completely different, I choose not to feel the pain by remembering something else.”

Nevertheless, neither man had regrets about the revolution or the necessity of removing Assad’s system of rule, which they said was responsible for a litany of abuses.

Cheikhou said he turned against the regime after undergoing torture during his military service in the Syrian army, while Najjar told Al Jazeera how the regime had imprisoned two of his sisters, the younger of whom was left mute upon her release.

Defeat in Aleppo has been presented by some analysts as a turning point in the war and one the rebels will struggle to recover from.

The men said that Assad was only able to pull off such a feat with the aid of foreign powers, such as Russia, and Iranian-alligned militias, and an eventual rebel victory was inevitable.

Evacuation of east Aleppo under way during ceasefire

But coupled with what seemed like consolatory optimism was anger at the sense the people in Aleppo had been abandoned by an international community duty-bound to protect them.

“The whole world is watching this small area get attacked with barbaric force,” Cheikhou said.

“No one moved a finger … they are just watching people die gradually, it turns my stomach,” he added, a wince and a clench of his fist betraying his otherwise stoic demeanour.

Najjar directed his anger at Muslim states and the West, in particular, for their failure to protect civilians and limiting their action to “meaningless statements”.

“Everyone knows what is happening, everything is known, but they choose not to do anything.”

Cheikhou added that he had also grown tired of demonstrations that did little to change the situation on the ground and were ignored by politicians.

“I think it’s best to just help directly,” he said.

“Send money, send aid, so at least they [Syrians] have some comfort, so that they can just continue to live.” 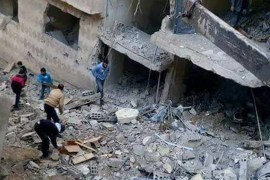 After Aleppo, what happens to Syria’s besieged towns?

East Aleppo was one of 40 besieged towns. Now residents of towns under regime siege fear they might face a similar fate.