As forces loyal to Syria’s President Bashar al-Assad closed in on the last pocket of rebel-held territory in east Aleppo, Al Jazeera spoke to Bilal Abdul Kareem, the last remaining foreign journalist in the area.

Kareem told Al Jazeera on Tuesday that “nobody was safe” in the enclave and that there was no safe passage out for women, children, the sick and the wounded.

“They went on a systemic campaign to destroy all of the medical facilities in east Aleppo, you don’t get more of a civilian type infrastructure than a hospital. They targeted water stations, they targeted courthouses, they targeted anything that provides a service to the people.”

Fears have been growing for thousands of trapped civilians as rebel fighters make a desperate last stand in their remaining pocket of territory in their former opposition stronghold.

“Some of the rebel fighters I’ve spoken to have said, ‘We’re going to take as many of Assad’s forces with us as we can’,” Kareem added.

When asked about why he and other civilians had not left the city, Kareem said: “People haven’t fled because of the fear of what government forces might do to them.

“They’ve killed more than half a million people, so that’s got be a major deterrent right there.

“Secondly, the territories that the government has taken over, there have been summary executions for everyone with a certain last name because they’ve been known to be fighters.

“This has been widely reported from people in the Bustan al-Qasr area. How can you trust a regime that used its resources to kill half a million of your countrymen?”

Shortly after his interview, news broke that a deal to evacuate rebel fighters and civilians from the city had been brokered with the Syrian government.

The transfers are set to begin early on Wednesday morning. 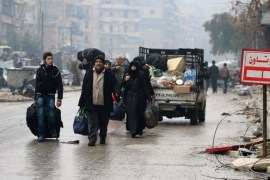 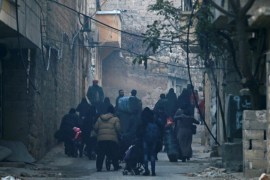 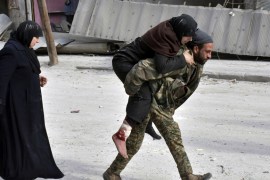