The governor of the Indonesian capital Jakarta has denied at the start of his blasphemy trial that he intended to insult the Quran, as outside the court rival rallies were staged.

Tuesday’s protests were under heavy police guard as Basuki Tjahaja Purnama, the first Christian governor of Jakarta in more than 50 years, arrived at the court flanked by lawyers and police for the first day of his trial.

About 100 Muslim protesters, calling for him to be jailed, chanted “God is great” outside the court, while supporters of the ethnic Chinese Christian sang the national anthem.

Indonesia’s blasphemy law originated with a presidential decree in 1965, as a response to demands from majority Muslim organisations calling for a prohibition on deviant beliefs.

It was made law in 1969. The law covers acts that deviate from the six officially recognised religions – Islam, Protestantism, Catholicism, Hinduism, Buddhism and Confucianism – as well as defamation of these religions and promotion of atheism.

In theory, the law covers only actual deviation from set practices. However, there have been numerous cases of people being prosecuted under separate laws for voicing criticism of the faiths. Such offences are punishable by up to five years in prison.

Purnama, better known by his nickname Ahok, bowed to the panel of five judges before being seated alone in the centre of the courtroom as proceedings began.

“It is clear what I said in the Thousand Islands was not intended to interpret the [Quran], let alone to insult Islam or the ulema,” said Purnama, who was responding after the prosecutor read out the charges.

He said that his comments were directed at rival politicians trying to get an unfair advantage in the election by saying that voters should not support a non-Muslim.

Purnama, who is running for re-election against two Muslim candidates, described a loving relationship with his adoptive Muslim parents on the remote Bangka Island.

“I am very saddened that I have been accused of insulting Islam because this accusation is the same as saying that I am insulting my adoptive parents and siblings,” he said.

During the hearing, Purnama sounded typically defiant at times.

“Hiding behind holy verses”, he said many in the country’s political elite were “cowards” who sought to divide Indonesians to gain power.

He could be jailed for up to five years if found guilty of breaking Indonesia’s tough blasphemy laws.

He ignited a storm of criticism in September when he controversially quoted a Quranic verse while campaigning in elections for the Jakarta governorship.

Purnama apologised, but his remarks angered many Muslim citizens, who marched against him in  rallies larger than any seen in Indonesia in many years.

“This trial is very political,” Al Jazeera’s Step Vaessen, reporting from Jakarta said. “It has come right in the middle of [Ahok’s] re-election campaign.”

Outside the court, dozens of protesters called for Ahok to be jailed.

Police guarded the court in heavy numbers, pledging to ensure there was no repeat of the violence seen at some protests against the governor.

The blasphemy saga has generated huge interest across Indonesia, with the proceedings being broadcast live on national television.

The Muslim-majority nation is home to 255 million people, roughly 90 percent of whom follow Islam. 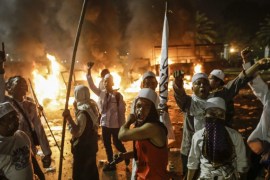 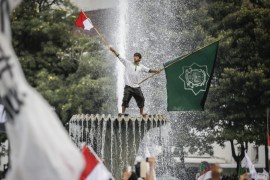 Is political Islam rising in Indonesia? 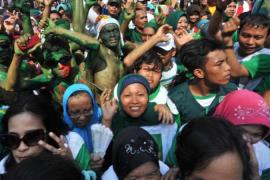