More journalists have been jailed this year by governments around the world than at any time in nearly three decades, according to a media rights watchdog.

The report by the Committee to Protect Journalists (CPJ), a nonprofit group that works to defend press freedoms, says a total of 259 journalists have been jailed in 2016, compared with 199 at the same time last year.

That is the highest number since the group began keeping detailed records in 1990.

The numbers do not include journalists who have disappeared or are held captive by non-state groups.

After Turkey and China, Egypt, with 25 journalists incarcerated, is listed in third place by the report – the CPJ’s annual census of imprisoned journalists.

This year marked the first time since 2008 that Iran was not among the top five worst offenders.

The report says this is because many of those sentenced in a post-election crackdown in 2009 have served their sentences and been released.

The CPJ says that at least 81 journalists were imprisoned in Turkey as of December 1, all facing anti-state charges.

A state of emergency is still in force in Turkey following a July 15 coup attempt, with a resulting government action against alleged coup sympathisers landing thousands in jail and forcing tens of thousands of people from their jobs.

“In Turkey, media freedom was already under siege in early 2016, with authorities arresting, harassing and expelling journalists and shutting down or taking over news outlets,” the report says.

Responding to the CPJ’s charges, Saban Disli, deputy chairman of Turkey’s ruling Justice and Development Party, told Al Jazeera the suspects in question were actually detained for committing crimes, not for doing their jobs.

“Arrest of even one journalist doing his job is a high number for us and it should not happen,” Disli said.

“These people, who are employed as journalists, commit crimes or praise outlawed terrorists in their articles, such as a suicide bomber who killed scores of people. Anywhere in the world they would be arrested.

“We don’t support these people to be under arrest during their trials, but some ran away, so the judiciary keeps them detained. I believe these things will be evaluated in a less biased manner when the state of emergency comes to an end.”

The CPJ report says that after Turkey, the worst offender in 2016 was China, where 38 journalists were in custody on December 1.

China had jailed the most journalists worldwide in the previous two years.

“In recent weeks, Beijing deepened its crackdown on journalists who cover protests and human rights abuses,” the report said.

Umut Uras contributed to this report 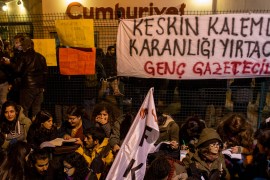 The story of Turkey’s media crackdown, told through the numbers. Plus, the state of the media in Serbia today.