The Syrian military operation to recapture rebel-held east Aleppo is in its final stages after the army took Sheikh Saeed and other districts, according to Lieutenant-General Zaid al-Saleh, head of the Aleppo security committee.

The government’s recapture of the city would mark its greatest victory since the war began in 2011.

“The battle in east Aleppo should end quickly. They [rebels] don’t have much time. They either have to surrender or die,” he told a group of reporters in Sheikh Saeed on Monday.

Rebels withdrew from at least six more east Aleppo neighbourhoods on Monday in the face of goverment advances, including al-Salheen, al-Firdous and Bustan al-Qasr, once one of the most fortified districts under opposition control.

Residents in the al-Firdous neighbourhood told Al Jazeera that government forces summarily executed dozens of people over alleged connections to rebel fighters. An exact figure could not be independently varified by Al Jazeera.

“The concern rebels have now is that we are seeing some kind of a domino effect, more neighbourhoods may be following as days go by,” Al Jazeera’s Imtiaz Tyab reported from Gaziantep on the Turkish border.

The opposition in Aleppo has lost 90 percent of the territory they once held in the city, the UK-based Syrian Observatory for Human Rights (SOHR) said.

“The battle of Aleppo has reached its end. It is just a matter of a small period of time, no more, no less … it’s a total collapse,” said Rami Abdel Rahman, SOHR’s director.

Opposition fighters are now confined to just a handful of neighbourhoods in the city’s southeast, including the Sukkari and Mashhad districts.

Russia’s defence ministry said on Monday that 728 Syrian fighters had laid down their weapons over the past 24 hours and relocated to western Aleppo.

Fighters captured the eastern half of Aleppo, Syria’s largest city and former commercial capital, in 2012.

“The situation in the city at the moment is total chaos. There are constant air strikes by the regime and Russian warplanes, artillery attacks, mortar attacks.

Until 6 or 7 am this morning war planes were hitting everywhere. Last night, the clashes and bombing never stopped. They were pushing and pushing towards the last part of the east. The war planes did not stop their air strikes. We haven’t been able to sleep at all.

It was really bad. That’s why people decided to run.

This morning people here were so desperate. They immediately rushed towards the regime-held parts. It was very easy for them to go because there was a lull in shelling in the morning. But the dangerous way that they take to the west [of Aleppo] might still get them killed, as they ran across frontlines.

There are many people dead, under buildings and on the streets where the regime launched attacks. There are no rescue workers to save anyone, to drag them out of the rubble.

People are going in the hundreds and thousands, even from the parts that have not been taken.

Most of them are families and civilian people, they have nothing to do with the rebels, the opposition or journalists.

The others, the families of activists, rebels, etc, are staying here, they have not left yet.

The areas that are still controlled by rebels are crowded, in fact overcrowded. You can see hundreds of rebels on the streets. Families are taking over half-destroyed buildings and cleaning them. These buildings have no doors or windows. They have no supplies. People just bring blankets and stay there.

If they continue to attack the remaining rebel-held areas, it is going to be catastrophe. Dozens of people will die immediately and other will die later, because of their injuries. There are no hospitals, there are no doctors.

The city is running out of all services like civil defence and hospitals; there is no medical aid; none of the pharmacies is working. Most of the shops are empty but not all of them.

There are still some lentils and flour that people are fighting to get. There is one bakery here that works, people crowd in front of it. They are so desperate to get a single loaf of bread.

One loaf of bread now is like half a dollar. Before the price was about ten percent of this.

People are using what they have, what they carried with them to the area they ended up in but everything is about to run out. And everything here is unbelievably expensive.

It has not rained for over a month. People are using water from the wells – to drink, clean and cook. 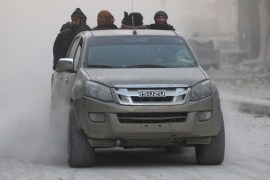 Russian deputy foreign minister says no agreement reached with US on providing safe passage to rebels from Syrian city.