A bomb blast has killed at least 25 people during Sunday mass inside a Cairo church near the main Coptic Christian cathedral, according to Egyptian state TV .

The explosion ripped through St Peter’s Church at around 10:00am local time, wounding at least another 49 people, according to Egyptian health ministry cited on state TV.

St Peter’s Church is beside St Mark’s Cathedral, which is the seat of Egypt’s Orthodox Christian church and is home to the office of its spiritual leader, Pope Tawadros II.

Services were being held in St Peter’s on Sunday morning, while St Mark’s Cathedral was being renovated.

“I found bodies, many of them women, lying on the pews. It was a horrible scene,” cathedral worker Attiya Mahrous, who rushed to the chapel after he heard the blast, told AP. His clothes and hands were stained with blood and his hair matted with dust.

The presidency declared national mourning after the attack.

President Abdel Fattah el-Sisi described the bombing as a “terrorist act” that has no place in Egypt.

About 10 percent of Egypt’s 82-million population are Christians.

According to Mohamad Elmasry, an associate professor of Media and Cultural Studies at the Doha Institute for Graduate Studies, the “barbaric attack against Coptic Christians is not an aberration”.

“[The attack] represents the continuation of a cycle of violence that has continued unabated since Egypt’s July 2013 military coup,” Elmasry told Al Jazeera.

Egypt’s Youm7 newspaper has posted video footage on its Twitter account of the aftermath of the bombing:

“Since the coup, the Egyptian government and ISIS-affiliated ‘terrorists’ have traded attacks. The government has cast an unnecessarily wide ‘terrorism’ net, carrying out unprecedented human rights violations, including several mass killings, against moderate members of the political opposition.”

The coup, which overthrew  Mohamed Morsi , Egypt’s first democratically elected president and a member of  the Muslim Brotherhood , brought with it a dramatic increase in violence, particularly in the Sinai region.

On Friday, six  policemen were killed in a bomb attack in Cairo  claimed by an armed group known as the Hasm movement.

The Egyptian army, under General Abdel Fattah el-Sisi, and its police forces have faced  dozens of attacks  from several armed groups that have continued to grow in recent years.

“Perhaps more than anything, today’s attack demonstrates the extent to which current President Abdel Fattah el-Sisi, who came to power largely on a security platform, has failed to deliver on one of his most important campaign promises,” Elmasry added. 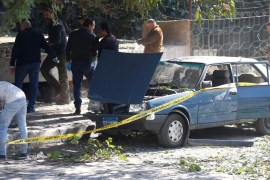 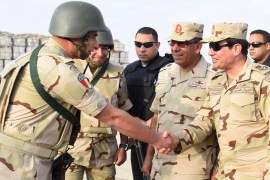