Hundreds of men from eastern Aleppo have gone missing after leaving rebel-held areas, the United Nations’ human rights office said on Friday, voicing deep concern over their fate at the hands of government forces.

UN human rights spokesman Rupert Colville told a news briefing the office had heard “worrying allegations that hundreds of men have gone missing after crossing into government-controlled areas” of Aleppo.

“Given the terrible record of arbitrary detention, torture and disappearances, we are of course deeply concerned,” he said.

Colville said family members had reported losing contact with the men, who are between the ages of 30 and 50, after they fled opposition-held areas of Aleppo about a week ago.

His comments came as Syrian government artillery bombarded the fast-shrinking rebel enclave in the heart of Aleppo on Friday.

The army has recaptured 85 percent of the eastern part of the city which the rebels had held since summer 2012.

The assault has prompted a mass exodus from east Aleppo where at least 80,000 people have fled their homes, according to the UK-based Syrian Observatory for Human Rights.

Despite losing more than two-thirds of their territory over the past few weeks, rebels remained defiant.

“This is a war of attrition – just because we pulled out of the eastern areas because of heavy air strikes, it doesn’t mean the war is over,” said Feras Basha, a rebel commander in besieged Aleppo.

“This doesn’t mean this is our end. We have been defending our territory.”

Aleppo: No deal reached between US and Russia

On Friday, the UN General Assembly voted 122 to 13 to demand an immediate cessation of hostilities in Syria, humanitarian aid access throughout the country and an end to all sieges, including in Aleppo.

Thirty-six countries abstained in the vote on the Canadian-drafted resolution on the nearly six-year-old Syrian conflict. Russia, Iran and China opposed the resolution.

General Assembly resolutions are non-binding but can carry political weight.

“This is a vote to stand up and tell Russia and Assad to stop the carnage,” US Ambassador to the United Nations Samantha Power told the General Assembly before the vote.

Near the historic city of Palmyra, meanwhile, 49 Syrian soldiers were killed in an advance by Islamic State of Iraq and the Levant (ISIL) fighters, the Syrian Observatory said.

The group’s Aamaq news agency distributed video showing what it says were Syrian soldiers fleeing their positions in the badlands west of Palmyra.

The Syrian government, backed by Russian forces, recaptured Palmyra from ISIL in March, to great fanfare. The fighters destroyed numerous monuments dating back to Roman times during their hold of the city.

A US-led coalition air strike destroyed a fleet of 168 oil tankers near Palmyra being used by ISIL to ferry illicit fuel in Syria, the coalition said Friday.

The coalition said it is systematically targeting the oil infrastructure used by ISIL, and Thursday’s strike resulted in estimated lost revenue of more than $2m.

“Stopping or severely hampering (ISIL’s) cash flow degrades their ability to fund the war effort in Iraq and Syria and terrorist attacks around the world,” the coalition said in a statement.

Back in Aleppo, some 150,000 civilians are believed to remain in the “ever-shrinking” opposition-held districts of the city, Colville said, also citing reports that rebels had prevented some civilians from fleeing to safety, which would be a potential war crime.

“Some of the civilians who are attempting to flee are reportedly being blocked by armed opposition groups,” Colville told reporters in Geneva.

“During the last two weeks, Fateh al-Sham Front [formerly al-Nusra Front] and the Abu Amara Battalion are alleged to have abducted and killed an unknown number of civilians who requested the armed groups to leave their neighbourhoods, to spare the lives of civilians.”

In addition, the groups had reportedly “demanded that activists inform them of civilians attempting to leave, along with the names of those who participated in protests against the presence of the Jabhat Fateh al-Sham group and other groups affiliated with them” in several neighbourhoods a few weeks ago, Colville said.

Speaking in Germany after talks with US Secretary of State John Kerry, Russian Foreign Minister Sergey Lavrov said military experts and diplomats would meet on Saturday in Geneva to work out details of a rebel exit from Aleppo’s eastern neighbourhoods, along with civilians who wanted to leave the city.

Aleppo, once Syria’s bustling commercial hub, has been largely divided between a government-held west and a rebel-controlled east since 2012. But government forces are now reported to be in control of about 75 percent of the east after a relentless three-week ground and air assault.

“The bombardment and shelling is … unbelievable,” Aleppo-based journalist Zouhir al-Shimale told Al Jazeera. “We have become useless. There’s nothing we can do. We can’t even leave.” 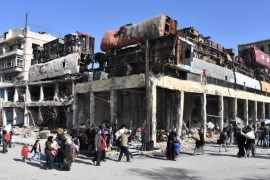 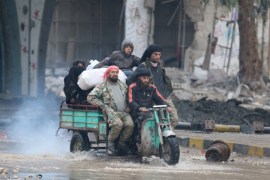 Aleppo: No deal reached between US and Russia

US State Department confirms Kerry and Lavrov met but no agreement on ceasefire or civilian evacuation was reached.