The system has been plaguing the region for some time now having begun life as an organised clutch of storms over southern Thailand. Just a few days ago Ko Samui reported a 24-hour rainfall total of 144mm.

The average for the entire month of December was 160mm, so there is little wonder that widespread flooding has been reported across central and southern Thailand.

According to Reuters news agency, more than a dozen people have been killed in flash floods. Since then, northeasterly monsoon winds have pushed the thundery downpours across the Nicobar Islands.

The storms have become increasingly organised and the torrential downpours have now brought floods to Port Blair, the capital city of the Andaman and Nicobar Islands.

Wednesday alone saw a remarkable 225mm of rain on the islands. In the process, about 1,400 tourists found themselves stranded.

On Thursday, Home Minister Rajnath Singh said that everyone was safe and appealed to families of the tourists not to panic.

Tropical Cyclone Vardah is now crawling away from the islands. It is still moving incredibly slowly with a forward speed of around 4km/h, but it will gradually gather pace as it continues to strengthen.

The storm currently has sustained winds of 85km/h and gusts nearer 100km/h. It looks set to peak by Saturday with winds of 130 gusting to 160km/h.

Thereafter, Vardah is forecast to weaken slightly before making landfall along the Andhra Pradesh coast on Sunday. Damaging winds will bring increasingly choppy seas to the region and the slow pace of the system makes flooding highly likely. 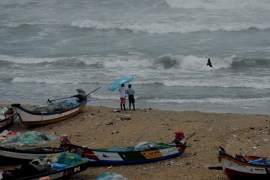 Wet and windy weather sweeps through Tamil Nada and Kerala before storm weakens over the Arabian Sea. 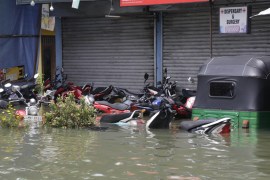