Russia is trying to destabilise German society with propaganda and cyber attacks ahead of the country’s general election, according to Germany’s domestic intelligence agency.

“There is growing evidence of attempts to influence the federal election next year,” said Hans-Georg Maassen, head of the BfV, citing “increasingly aggressive cyber espionage” against political entities in Germany.

He expressed particular concern that voters’ increasing use of social media could make them more vulnerable to disinformation.

BfV said it had seen a wide variety of Russian propaganda tools and “enormous use of financial resources” to carry out “disinformation” campaigns aimed at the Russian-speaking community in Germany, political movements, parties and other decision makers.

The goal of the effort was to spread uncertainty in society; “to weaken or destabilise the Federal Republic of Germany”; to strengthen extremist groups and parties; to complicate the work of the federal government; and to influence political dialogue.

“We are worried that echo chambers are being created there,” Maassen said before adding that “automated opinion-forming” with bots could be used to spread fake news.

Media outlets controlled by the Russian government and pro-Russian blogs in Germany regularly report on crimes committed by asylum seekers in the country, linking the incidents to Chancellor Angela Merkel’s decision to allow hundreds of thousands of refugees into the country last year.

German politicians have been the targets of recent hacking attacks, which Maassen said could have been attempts to gather information that could be used to discredit them.

“We expect a further increase in cyber attacks in the run-up to the elections,” he said.

Germany has not yet set a date for its national election in 2017, but it is expected to take place in September.

Last month, Merkel said she could not rule out Russia interfering in Germany’s 2017 election through Internet attacks and misinformation campaigns.

Russia has been blamed for the hacking and release of Democratic National Committee emails before the US presidential election.

But Moscow has strongly denied involvement in orchestrating cyber attacks on foreign soil and hit back with allegations of its own against the West. 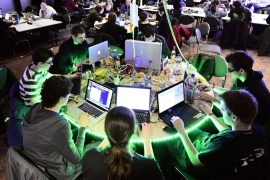