Syria’s army and allied militias pushed into rebel-held parts of Aleppo’s Old City on Tuesday, looking closer than ever to achieving the most important victory of a ruinous five-year-old war.

A rebel official said that they would never abandon Aleppo, their last urban stronghold in the country, after reports that diplomats from the United States and Russia were preparing to discuss facilitating the surrender and evacuation of rebels from territory they have held for years.

Russian Foreign Minister Sergey Lavrov said talks with the US on a rebel withdrawal would begin in Geneva as soon as Wednesday morning. But sources familiar with the plans told the Reuters news agency that no talks would take place this week in the Swiss city.

Aleppo, once Syria’s commercial powerhouse, has been largely divided since 2012 between a rebel-held east and a government-controlled west, and has suffered some of the war’s worst violence. The government has in recent weeks, with Russian air support, launched a huge offensive to take the entire city.

Government forces won control of seven districts on Tuesday, including the strategic Shaar neighbourhood, and were in control of more than three quarters of former rebel-held territory in the divided northern city, state media said.

The Britain-based Syrian Observatory for Human Rights called Shaar “the most important neighbourhood in the heart of east Aleppo”, and said rebels were being reduced to fighting a “war of attrition”.

The government and its allies entered rebel-held parts of the Old City late on Tuesday, the Observatory, which relies on a network of contacts in the country to monitor the war, said.

Rebels denied that but said the army and its allies were trying to break through and that fighting was ongoing.

The Syrian army said it had also taken over other areas to the east of the Old City, including Marja and Karm al-Qaterji, bringing it closer to cutting off another pocket of rebel control.

The rapid government gains have left rebels scrambling to defend the shrinking enclave they still control in the city’s southeastern districts.

READ MORE: I live in Aleppo, under siege

Despite mounting criticism of the offensive, which started on November 15 and relies heavily on bombing raids carried out by Russian aircraft, world powers have struggled to find a way to halt the fighting.

The offensive has killed more than 341 people in east Aleppo, including 44 children, according to the Observatory. Rebel fire into the government-held west of the city has killed 81 people, including 31 children, in the same period, it said.

“We have been trying to find a way to get to the negotiating table … but Assad has never shown any willingness,” US Secretary of State John Kerry said at a meeting of NATO foreign ministers in Brussels.

“Russia says Assad is ready to come to the table … and I am in favour of putting that to the test,” he said.

Kerry, who has had repeated meetings on Syria with Lavrov, his Russian counterpart, said that they would meet again on Wednesday or Thursday in Hamburg, Germany.

Even if Aleppo falls, “the war will continue,” Kerry said, stressing that there had to be a negotiated settlement.

‘They’ll fight until the last drop of blood’

Russia had announced talks with the US in Geneva for Tuesday or Wednesday on organising a rebel withdrawal from Aleppo before a ceasefire.

But on Tuesday, Lavrov accused Washington, which has backed rebel groups against Assad, of backtracking.

“It looks like an attempt to buy time for the rebels to have a breather, take a pause and replenish their reserves,” Lavrov said.

Moscow had the impression that “a serious discussion with our American partners isn’t working out”.

Kerry denied any change of plans when asked about Moscow’s allegations.

Washington itself accused Moscow of stalling after Russia and China blocked a UN Security Council resolution on Monday calling for a seven-day ceasefire.

Russia said the resolution should have been postponed until after the Geneva talks, saying an agreement on organising a withdrawal was close.

Syria said it would not agree to any ceasefire without a guarantee of a rebel withdrawal.

“Syria will not leave its citizens in east Aleppo to be held hostage by terrorists, and will exert every effort to liberate them,” said a foreign ministry statement carried by state media.

The rebels have so far rejected any talk of leaving the city, with Yasser al-Youssef, of the leading Nureddin al-Zinki faction, calling the proposal “unacceptable”.

General Asaad Nassif, a brigade commander with the Free Syrian Army, told Al Jazeera that the fighters were “steadfast and fiercely resisting”.

“They’ll fight until the last drop of blood,” he said. “They’ve made their choice to die as martyrs or to be victorious.”

Syria’s conflict started in 2011 with protests calling for Assad’s resignation before exploding into all-out war. The ensuing violence has killed more than 400,000 people, made half of all Syrians homeless, and sparked the world’s largest refugee crisis, sending tens of thousands of people streaming towards Europe in rickety boats.

Outside Aleppo, the government and its allies were also putting severe pressure on remaining rebel holdouts. The Observatory said a heavy Syrian and Russian aerial bombardment in the past three days in the mostly rebel-held Idlib province to the southwest had killed more than 100 people. 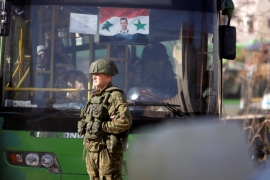 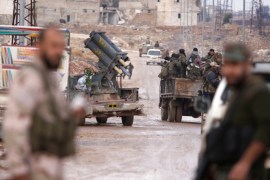 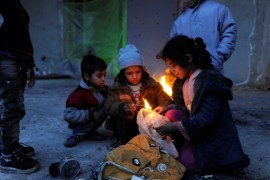