Forces aligned to Libya’s UN-backed national unity government said they were hunting down the last remaining ISIL fighters in Sirte after the group’s ouster from its former bastion.

Soldiers were said to be “chasing the last jihadists hiding in fewer than 10 houses” on Tuesday in the seafront district of Al-Giza al-Bahriya, the last strip to fall in the almost seven-month-long battle.

They also “managed to rescue a group of women and children that the defeated gangs of Daesh were using as human shields”, the force backing the Government of National Accord (GNA) said on its Facebook page.

Mufath al-Fadeel, head of the pro-government 154th Brigade, told Al Jazeera that while Sirte was now under military control operations were ongoing.

“The city is free of ISIL and we are tracking down some who fled, to finish them off,” Fadeel said. “The city is liberated but the military operation is not over yet. It goes on until we ensure they are all tracked down.”

The pro-GNA force had announced full control of Sirte on Monday in a major blow to the armed group, and that dozens of its fighters had surrendered.

“The most important reason behind this is trapped families, women and children which ISIL are using as human shields,” he said.

“Another reason was to force ISIL fighters to surrender after the siege imposed on them. We have seen some ISIL fighters handing themselves over to the forces after they ran out of ammunition and food supplies. There is fighting going on in nearby buildings, where ISIL fighters are fortified.”

While government forces were telling families to flee, eyewitnesses told Al Jazeera ISIL was shooting anyone trying to leave Sirte.

Akram Glawan, Misrata Hospital spokesman, told The Associated Press news agency in addition to the 711 Libyan fighters killed in the battle for Sirte, another 3,200 have been wounded.

In Pictures: Embedded with the Libyan forces fighting ISIL in Sirte

Libyan television stations have broadcast footage of women in black and children, their hair covered with dust, emerging from Sirte homes, and of soldiers celebrating a hard-fought victory.

“The liberation of Sirte … is a historic day for Libya that must be celebrated across the nation,” a GNA vice-premier, Moussa el-Koni, wrote on Twitter.

ISIL fighters are still thought to be present in several parts of southern and eastern Libya, but no longer control any towns.

Despite the apparent victory in Sirte, Libya remains deeply divided, with the national unity government, based in the capital Tripoli, unable to gain recognition from the elected parliament, based in the eastern city of Tobruk.

Analysts say Haftar’s growing strength means the UN-backed deal setting up the national unity government is increasingly out of step with the balance of power on the ground and should be revisited.

Even in Tripoli, the unity government’s rule is far from secure, with a third rival administration backed by hardline armed groups recently attempting a comeback. 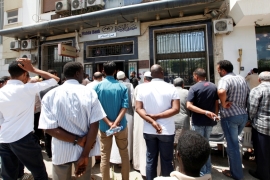 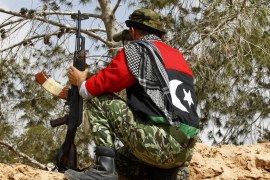