Thousands of Indians have taken to the streets to mourn the death of Jayalalithaa Jayaram, chief minister of India’s southern Tamil Nadu state, who died at the age of 68 after a prolonged illness.

Jayalalithaa, one of the country’s most popular political leaders, died late on Monday evening at the private Apollo Hospital in the state capital, Chennai, where she suffered a heart attack on Sunday.

Security was tight outside the hospital, where hundreds of her supporters had kept a round-the-clock vigil since the former film star was first admitted in September suffering from a fever.

Television footage showed crowds praying for the chief minister, who is known simply as “Amma”, or mother, many of them in tears.

As news of her death spread, thousands of people thronged the road long past midnight to watch as a motorcade escorted the ambulance carrying her body from the hospital to her home. Police had a hard time controlling people from rushing onto the road. Many people wept and beat their breasts overcome by grief.

Bollywood and Tamil actors praised Jayalalithaa and expressed sorrow over her passing.

“Not just Tamil Nadu but India has lost a brave daughter. I pray to God to rest her soul in peace,” Tamil superstar Rajinikanth said in a Twitter message.

Fearing her death might trigger widespread violence and rioting, police deployed across the state.

The neighbouring state of Karnataka stopped public buses from travelling to Tamil Nadu after one of its buses was attacked Monday.

Both Tamil Nadu and Kerala states declared public holidays. In Tamil Nadu, schools, offices and businesses were to be closed for the next three days.

Jayalalithaa’s body, in a coffin draped with the national flag, was taken on Tuesday morning to a public hall in Chennai to allow people to pay their respects. The date and time of her funeral has not been announced as the state government needed time to arrange security to handle the hundreds of thousands of people expected to attend.

Within hours of Jayalalithaa’s death, her trusted lieutenant, O Panneerselvam, was sworn in as chief minister of the state.

Jayalalithaa had been in the hospital for two months after being admitted with a fever, dehydration and a respiratory infection.

At the time, thousands of people prayed and fasted outside the hospital for her recovery. Doctors barred visitors, sparking rumours that they were withholding bad news out of fear it could trigger the same outpouring of grief, riots and suicides that followed the death of Jayalalithaa’s political and acting mentor, MG Ramachandran.

Jayalalithaa was kept on a ventilator in the intensive care unit for weeks, doctors said. She also suffered from diabetes.

Jayalalithaa was 13 when she began her film career and quickly became known as a romantic lead in many of the nearly 150 Tamil-language movies that she worked on.

She entered politics in the early 1980s, under the guidance of Ramachandran, and after his death in 1987 she declared herself his political heir and took control of the All India Anna Dravida Munnetra Kazhgam party.

She served as Tamil Nadu’s chief minister, the highest elected position in the state of 71 million people, for nearly 14 years over five terms beginning in 1991. She regained her office last year after a corruption case against her was overturned.

Her supporters praised her efforts in fighting rural poverty with handouts like laptop computers for students, cows and goats for farmers, and spice grinders for homemakers.

Gifts are commonly used by Indian political parties to court voters, but her handouts were criticised by some as wasteful pandering and unfair bribery. But Jayalalithaa defended the giveaways as welfare measures aimed at helping the poor.

She herself was known for leading an extravagant lifestyle. In 1997, police found more than 10,000 saris and 750 pairs of shoes after raiding her home as part of a corruption investigation.

In the first half of 2014, Jayalalithaa made a bid to become India’s prime minister by saying she would form a coalition in New Delhi if no party dominated elections. But the Bharatiya Janata Party won a clear majority, catapulting Modi into the nation’s top job.

Later that year, she was forced to step down as chief minister in Tamil Nadu when she was sentenced to four years in prison for amassing more than $10 million during her political career, a wealth the court said was disproportionate to her income.

She spent 21 days behind bars before the Indian Supreme Court released her on bail. In May 2015, an appeals court overturned the corruption charges, clearing the way for her return to power. She returned to office as chief minister on May 23 and a month later was re-elected in a by-election.

Jayalalithaa was born in 1948 in the village of Melukote, in what is now the state of Karnataka. 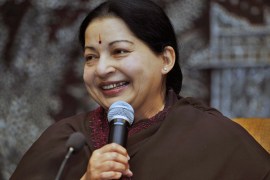