Iraqi soldiers bore down on a vital bridge over the Tigris River in Mosul’s city centre as the seven-week battle to recapture ISIL’s last stronghold in the country intensified, the army said.

Lieutenant-General Abdul Ameer Rasheed Yarallah, the campaign’s commander, was quoted by Iraqi television as saying on Tuesday that troops had entered Al-Salam Hospital, less than 1.5km from the Tigris, which runs through Iraq’s second-largest city.

Air raids by the US-led coalition aided the ground advance in the Salam neighbourhood.

“Starting before dawn, we heard more than 20 air strikes,” said Fathii Muhammad Yousef, who took cover from the clashes with his family in their home just a block from the front.

INTERACTIVE: Battle for Mosul – Who controls what

For the past month Iraqi forces have battled ISIL fighters on the streets just outside Yousef’s home. Four of his neighbours have been wounded by gunfire and shrapnel so far in the operation, he said.

The offensive involved the army’s Ninth Armoured Division, which had been tied up for more than a month in close-quarter combat with fighters from the Islamic State of Iraq and the Levant (ISIL, also known as ISIS) on Mosul’s southeastern edges.

A colonel in the armoured division said Tuesday’s assault aimed to push towards the river and ultimately reach Mosul’s Fourth Bridge, the southernmost of five bridges spanning the Tigris, which splits the city in two.

“We are using a new tactic – increasing the numbers of advancing forces and also attacking from multiple fronts to take the initiative and prevent Daesh [ISIL] fighters from organising any counterattacks,” the colonel said on condition of anonymity.

The bridge, like three others, has been hit by US-led air strikes to prevent ISIL sending reinforcements and suicide car bombs across the city to the eastern front, where counterterrorism troops have spearheaded the army campaign.

The last and oldest bridge, built of iron in the 1930s, was targeted on Monday night. The structure was not destroyed, but the air strikes made two large craters in the approach roads on both sides.

The army push in the southeast comes as federal police units stationed west of the Tigris prepare a separate advance towards the airport on the southwestern edge of the city.

About 100,000 Iraqi soldiers, security forces, Kurdish Peshmerga fighters, and mainly Shia paramilitary forces are participating in the Mosul campaign that began on October 17.

Although it has made advances inside eastern Mosul, the army says it is battling in the toughest urban warfare imaginable – facing hundreds of suicide car bomb attacks, mortar barrages, sniper fire, and ambushes launched from a network of tunnels.

Its advance has also been slowed by the presence of more than one million residents in the city.

The battle for Mosul has created a burgeoning humanitarian crisis with an estimated 650,000 people without potable water.

As the fight has ground on, Yousef’s family has run out of water and is running low on food.

“All we have now is well water. It’s not clean enough to drink, but what else can we do?” he said, adding that the water is making some of his youngest children sick. 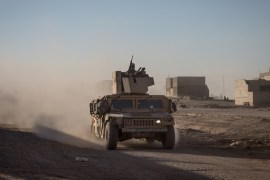 Seven weeks into the Mosul operation, the remaining residents struggle for basics of survival.