After a period of one to two months without any significant rain, parts of southern US have been hit by record rainfall.

Late November saw heavy rainfall in many parts of the region, with wildfire-ravaged Tennessee welcoming up to 125mm of rain.

Drought is less of an issue for much of Texas. The south of the state can usually expect a maximum of around 100m of rain during the month of December.

Yet on Saturday alone, the coastal city of Galveston recorded a total of 161mm of rain, a record for December. Across Galveston County, rainfall totals are thought to have reached in excess of 250mm.

Unsurprisingly, widespread flooding was reported, with some roads becoming impassable, particularly to the north of the city. Shelters were opened for those made temporarily homeless by the floods.

Despite the inconvenience and disruption caused by the flooding, much more rain is needed to have any impact on the drought situation across the region.

That may be partially eroded in the coming days, as the high-level low-pressure system responsible for the rain looks set to continue its slow eastward path. As the low-pressure system moves east, it will reinvigorate an east-west orientated frontal boundary, introducing even more moisture-laden air from the Gulf of Mexico.

Many of the above-mentioned states could see 50 to 125mm of rain until the end of Tuesday. 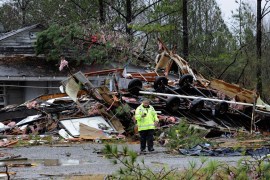 Many more have been injured as storms rip through the southeastern part of the United States. 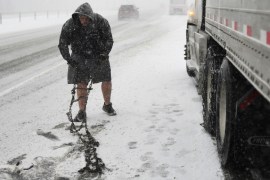 In Colorado, summer to winter in one day

After the lingering summer, winter weather arrives and will spread across North America.