At least nine people have been killed after a fire broke out inside a warehouse holding a rave party in northern California with the status of many people still unknown.

The blaze started on Friday at about 11pm local time (07:00 GMT Saturday) inside the two-story building in the city of Oakland.

“It was too hot, too much smoke, I had to get out of there,” Bob Mule, a photographer and artist who lives in the building and suffered minor burns, told the East Bay Times. “I literally felt my skin peeling and my lungs being suffocated by smoke. I couldn’t get the fire extinguisher to work.”

Fire officials were still trying to determine how the fire started, said Oakland Fire Chief Teresa Deloach Reed, who described the building as “huge.” She said the roof had collapsed, complicating efforts to recover bodies.

“There is a large majority of that building that has not been searched,” Reed said during a press briefing.

“We are hoping that the number nine is what there is and that there are no more,” the fire chief said, referring to the number of known fatalities. “But we have not done a complete search of the building.”

The San Jose Mercury News newspaper quoted fire officials as saying they were told up to 70 people were at the warehouse.

The fire was brought under control by early morning, with crews sifting through the rubble searching for victims, fire officials said.

Oakland is a major California city about 19km east of San Francisco. 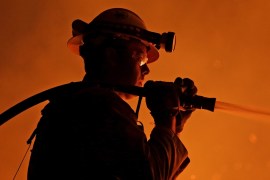