Colombia’s Congress has approved a revised peace deal with the FARC rebel group, paving the way to end a conflict that has lasted more than 50 years.

The lower house voted 130-0 on Wednesday to approve the text adopted a day earlier by the Senate.

President Juan Manuel Santos said the vote provided “landmark backing” for a deal he personally pushed for. Santos, this year’s Nobel Peace Prize winner, shepherded the revised deal through Congress after voters shocked the world by rejecting an earlier version in a referendum last month.

READ MORE: Why did Colombians reject the FARC peace deal?

The government’s chief peace negotiator with the FARC, Humberto de la Calle, had urged politicians to ratify this deal, warning that the army’s ceasefire with the leftist guerrillas was “fragile”.

The first agreement was rejected in a referendum in October, with majority of voters saying they felt it was too lenient toward the rebels, who have battled the government for 52 years.

Al Jazeera’s Alessandro Rampietti, reporting from Medellin, said the approval was a significant step towards peace in the country, but added that the deal still faced hurdles.

“A few more obstacles remain,” he said, adding the constitutional court still needed to rule on a mechanism allowing Congress to pass implementing regulations, including an amnesty law.

They range from a prohibition on foreign magistrates judging crimes by the FARC or government, to a commitment from the rebels to forfeit assets, some of them amassed through drug trafficking, to help compensating their victims.

The revised deal aims to end 52 years of conflict that has killed more than 220,000 people, left 60,000 missing and displaced millions.

However, a period of discord and uncertainty looks certain, as opponents threatened to resist the revised deal.

Uribe, the former president, had complained that it still did not satisfy his key demands, notably punishing FARC leaders for their crimes. 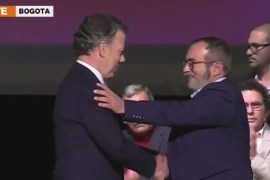