South Korean prosecutors investigating a confidante of President Park Geun-hye for corruption have searched the offices of Samsung, according to local media.

Samsung, the world’s largest manufacturer of smartphones, televisions and memory chips, is suspected of having secretly funded the sporting activities of the daughter of Choi Soon-sil, Park’s friend, it was reported on Tuesday.

Samsung, which is already reeling from the disaster surrounding its Galaxy Note 7 smartphone, confirmed that its offices had been raided but gave no further details.

The company is suspected of having transferred $3.1m to a company owned by Choi in Germany.

The money was allegedly used to pay for daughter’s training as a dressage rider.

Tuesday’s raid also came just as Park agreed to cede some control of state affairs as the result of the damaging corruption scandal that has engulfed her administration.

In what is being considered a major political concession, Park told the speaker of the National Assembly that she would accept a prime minister chosen by the opposition-controlled legislature “and let him control the cabinet”.

The prime minister is normally a largely symbolic post in South Korea, where power is firmly concentrated in the executive.

It was a double surrender by Park – effectively jettisoning her own nominee for prime minister and relinquishing some of her extensive powers to whoever parliament chooses.

Al Jazeera’s Harry Fawcett, reporting from Seoul, said that Park’s concession “doesn’t go perhaps as far as some opposition members were demanding – that all affairs should be handled by the prime minister and that the president should simply step back altogether – but it does allow some ground for work to start on some agreement”.

Park is facing a growing scandal over Choi’s alleged influence on state affairs despite her having no official position in the government, with tens of thousands of protesters in Seoul demanding Park’s resignation over the weekend.

Choi has been arrested on charges of fraud and abuse of power.

The charges relate to allegations that Choi used her personal relationship with Park to coerce donations from large companies like Samsung to non-profit foundations she set up and used for personal gain.

She is also accused of interfering with government affairs, including the nomination of senior officials.

Reports of the unhealthy influence Choi wielded over Park have sent the president’s approval ratings plunging to record lows and led to mass street protests calling on her to resign.

In a bid to restore public trust, Park reshuffled her advisers and senior cabinet members, and nominated a liberal candidate for prime minister from outside her conservative Saenuri Party.

But opposition parties had pledged to block her nominee on the grounds that they were not properly consulted.

During their meeting, Chung Sye-kyun, the parliamentary speaker, told Park that her biggest priority should be to alleviate widespread public concern and anxiety. 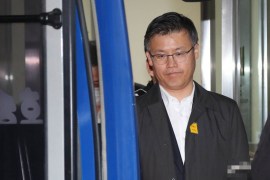 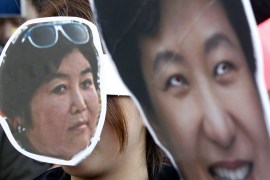 Kim Byong-joon named new PM by Park Geun-hye as she reaches out to Liberals amid controversy involving her confidant. 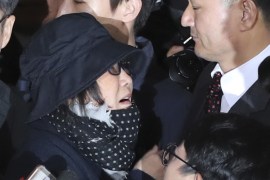