The World Health Organisation says at least 7,000 people have been killed in Yemen’s 20-month civil war, and the UN peace envoy warns that the country is teetering on the “brink of the abyss”.

In a statement released on Monday, the WHO said “more than 7,070 people had been killed and over 36,818 injured” as of October 25 – with another 21 million people in urgent need of health services.

More than half of all health facilities across the country have been shut or were only partially functioning amid a “critical shortage” of doctors, it said.

Speaking to reporters in the capital Sanaa, UN envoy Ismail Ould Cheikh Ahmed lamented the devastating violence and reiterated calls for an end to the fighting.

“People are dying … the infrastructure is falling apart … and the economy is on the brink of abyss,” he said.

Saudi Arabia, along with a coalition of other Arab states, intervened in Yemen in March 2015 in support of the government of President Abd-Rabbu Mansour Hadi after Houthi rebels took over the capital.

Since then, the coalition has been blamed for several attacks on medical centres – including some run by international aid group Doctors Without Borders (MSF) – schools, factories and homes, which have killed scores of civilians.

Last month, at least 140 people were killed and more than 500 wounded when several air strikes targeted a funeral reception in the capital.

A recent report published by the Yemen Data Project, a group of security and human rights researchers, said more than one third of coalition air strikes hit civilian sites, including schools, hospitals and mosques.

Out of the more than 8,600 air raids it examined, the report found 3,577 were listed as hitting military sites and 3,158 non-military, while 1,882 strikes were classified as unknown.

The UN envoy urged the Arab coalition controlling Yemen’s airspace to allow commercial flights in and out of Sanaa’s international airport to evacuate the wounded.

The coalition, however, has argued that the rebels would use the airport – completely under their control – to transport weapons.

READ MORE: ‘My children are starving to death’

International organisations have also warned in recent weeks of a spread of disease and growing malnutrition rates in the country.

The UN has confirmed 71 cases of the disease, which is transmitted through contaminated drinking water and causes acute diarrhoea.

Attempts by the UN envoy to coax all sides to commit to a ceasefire and resume peace talks have failed.

Ould Cheikh Ahmed urged the rivals to “make some concessions” and defended a plan for peace he put forward last month.

The mediator, who had been discussing his proposal with the rebels since Thursday, was heading to Riyadh to meet Hadi. 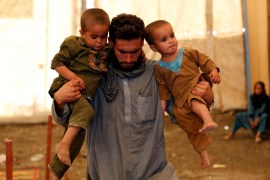 The frighteningly high human and financial costs of war

The ravages and costs of war can persist for generations after the fighting and bombing stop.