Gaza City – Umm Baha has become a regular participant in protests against reduced UNRWA services in the besieged Gaza Strip.

The 43-year-old Palestinian widow says she has no choice but to demonstrate against recent cuts to services offered by the United Nations refugee agency. “The diminished assistance that I receive is disproportionate, considering my mounting responsibilities of taking care of six orphans,” Umm Baha told Al Jazeera.

Two years ago, she used to receive food parcels containing ingredients such as oil, sugar and flour at least four times a year; now, it is twice a year at most.

The diminished assistance that I receive is disproportionate, considering my mounting responsibilities of taking care of six orphans.

Drastic UN cuts to food rations, healthcare and education programmes have added to the financial woes of Palestinian refugees in Gaza over the past few years. As Gaza’s population rises, no new clinics have been built to address the population’s needs, while 25 nursing positions were recently eliminated.

The healthcare cuts have hit particularly hard – with a lack of specialists, most patients are now treated by general practitioners, while the lack of sufficient childbirth and emergency units has pushed citizens to seek costlier medical care in private health facilities.

For the past three years, a chronic funding pitfall – this year’s deficit has reached $70m – has resulted in reductions to UNRWA’s core services. Protests against the cuts by Palestinian refugees have become frequent around the UN agency’s headquarters in Gaza City.

“Cutbacks have become the norm in the UN policy towards Gaza. The latest measures have affected most facets of life, and we call on UNRWA’s staff to reverse them right away,” Moeen Abu Okel, a representative of one of the committees, told Al Jazeera.

He noted that the agency has failed to fully commit to its original mandate in Gaza, as it has closed vocational workshops, decreased food aid, frozen branch appointments and failed to offer graduates anything beyond short-term contract work opportunities.

The UNRWA’s spokesperson in Gaza, Adnan Abu Hasna, told Al Jazeera that the agency is struggling against the odds in Gaza. “UNRWA has been always committed to its responsibilities towards refugees … but the austerity measures taken lately are meant to regulate our priorities, so that we can lessen the financial strain,” Abu Hasna said, noting that once the financial gap is bridged, all the work and development programmes will be resumed.

When that may happen remains unclear.

Founded more than a half-century ago, UNRWA relies on voluntary contributions from donor states, most notably the United States and the European Union.

Abu Hasna said that the agency was seeking a steadier funding source by including the UNRWA’s budget within the larger UN budget, while also seeking out more donor states.

Amid a decade-long Israeli blockade and three major military onslaughts during the same period, the Gaza Strip is in the throes of an unprecedented socioeconomic crisis. Unemployment has soared past 40 percent, plunging many of the territory’s youth into uncertainty.

Tahreer Mohammed, who graduated from university with a bachelor’s degree in Arabic five years ago, says that her search for a stable job at the UNRWA’s schools has been an impossible mission.

“Each time I applied for a teacher job, I successfully passed difficult tests and interviews, but I was only given a temporary contract that could not be renewed,” Mohammed, a married mother of four children, told Al Jazeera.

Austerity measures have also resulted in larger class sizes in UNRWA schools, with more than 50 students to each teacher. This system has rendered teachers unable to meet the needs of their students, they say.

At the same time, meals for children at UN primary schools were cancelled three years ago, while extracurricular activities have been substantially pared back.

The dwindling funding comes in stark contrast to the tremendous growth in need among Palestinian refugees in Gaza – a fact that the UNRWA openly acknowledges.

“The numbers of UNRWA’s aid recipients have shot up from 80,000 in 2000 to about a million residents in Gaza in 2016. More funds must be destined to absorb these growing numbers,” Abu Hasna said.

“UNRWA is not the silver bullet to put an end to the severe problems in Gaza. The siege must be lifted, and a genuine collaboration with a functioning Palestinian government is badly needed to vanquish the current stubborn predicament.” 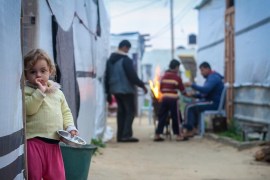