President Daniel Ortega is expected to easily clinch a third consecutive term in elections in Nicaragua on Sunday, buoyed by steady economic growth that has trumped fears he is trying to install autocratic family rule.

Ortega and his running mate – his wife Rosario Murillo – have nearly 70 percent support, according to a recent poll, tapping into strong voter approval for a drop in poverty in one of the poorest countries in the Americas since he took office in 2007.

“He [Ortega] is the only person who has worked for the poor and he will keep doing it because that is his essence,” said Jose Vicente Pong, a 64-year-old retiree, casting his vote by the ministry of labour in Managua.

“He comes from poverty and he’ll keep working for the poor.”

Emerging as leader of the Sandinista movement that toppled dictator Anastasio Somoza in 1979, Ortega served one term as president in the 1980s before being sidelined for years.

He won Nicaragua’s 2006 election and hasn’t looked back since.

Opponents have accused Ortega of trying to set up a “family dictatorship” since he appointed relatives to key posts, and after his Sandinistas pushed constitutional changes through Congress that ended presidential term limits in 2014.

“Ortega gets his way and he doesn’t care if he violates the rights of others,” said Maximino Rodriguez, candidate of the centre-right Liberal Constitutionalist Party (PLC), Ortega’s closest rival, polling just 8 percent support.

“Supposedly he fought against the Somoza dictatorship, and the Sandinistas themselves regard Ortega as worse than Somoza,” he added.

Ortega, who has made few campaign appearances, has promised to defend his social and economic achievements if he wins.

A substantial part of those gains have been funded by Venezuelan petro-dollars that have underpinned social programmes, helped private business, and slashed energy costs.

Ortega has also forged alliances with entrepreneurs, helping Nicaragua to achieve average growth of 5 percent in the past five years, buttressed by high prices for its meat, coffee and gold exports, as well as remittances and foreign investment.

Still, some critics say Ortega has become everything he fought against. Thirty-seven years ago, the socialist Sandinista rebels toppled the Somoza regime, which had ruled Nicaragua for more than five decades.

“It is an authoritarian, repressive, family model – identical.” 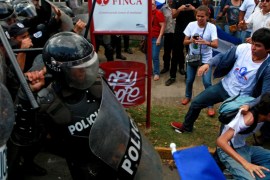 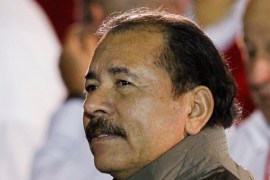 The reform adopted by the National Assembly allows President Ortega to run for fourth term.