ISIL said on Friday that it was behind a car bombing that killed nine people in Kurdish-dominated southeastern Turkey, according to US-based monitors.

“An insider source for Amaq Agency: Fighters from the Islamic State detonated an explosives-laden vehicle parked in front of a Turkish police headquarters in Diyarbakir in southeastern Turkey,” the SITE Intelligence Group said, citing Amaq, which is a name ISIL often uses when claiming responsibility for attacks.

In an audio message released earlier this week, reclusive ISIL leader Abu Bakr al-Baghdadi broke a nearly year-long silence to call for attacks against Turkey, as well as Saudi Arabia, and for his fighters to hold their ground in their stronghold of Mosul, Iraq.

Ankara has troops stationed at a base just outside Mosul and Turkish President Recep Tayyip Erdogan’s escalating rhetoric has raised fears of an expanded Turkish military intervention in Iraq.

“[The attack] could be retaliation by [ISIL] for the fact that Turkey is now participating in the coalition against [ISIL],” Bulent Aliriza, the director of the Turkey Project and senior associate at the Centre for Strategic and International Studies in Washington, told Al Jazeera.

Aliriza said, though, that Turkish support of Syrian opposition fighters “effectively prevented the establishment of a Kurdish belt across northern Syria, and that was something that must have annoyed the YPG”.

Turkey views the People’s Protection Units, or YPG, as an extension of the outlawed Kurdistan Workers’ Party (PKK) which it initially blamed for the blast outside the police station in Diyarbakir, Turkey’s main majority-Kurdish city.

Prime Minister Binali Yildirim said the PKK had again shown its “ugly face” with the attack.

The attacks came as Turkey jailed the two leaders of the country’s main pro-Kurdish party and 10 of the party’s MPs.

Selahattin Demirtas and Figen Yuksekdag, co-leaders of the Peoples’ Democratic Party, were jailed pending trial after being held in overnight raids, officials said. Ten other of the party’s MPs were also detained, although some were later released.

The arrest of elected members of the Turkish parliament’s third largest party, and the detention or suspension of more than 110,000 officials since a failed coup in July, may “go beyond what is permissible”, the United Nations human rights office said.

The United States expressed deep concern, while Germany and Denmark summoned Turkish diplomats over the Kurdish detentions, and European Parliament President Martin Schulz said the actions “call into question the basis for the sustainable relationship between the EU and Turkey”. 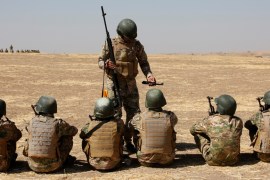