The UN human rights agency says Myanmar’s Rohingya Muslims may be victims of crimes against humanity as Kofi Annan arrives for a visit that will include a trip to the conflict-ravaged region of Rakhine.

Annan, the former UN chief, is visiting Myanmar in his capacity as the chairman of the Advisory Commission on Rakhine State, an initiative launched by Aung San Suu Kyi’s government in August 2016 to identify conflict-prevention measures, facilitate long-term communal reconciliation and address development issues.

The Myanmar army has carried out a bloody crackdown in the western state and thousands of the Muslim minority have flooded over the border into Bangladesh this month, making horrifying claims of gang rape, torture and murder at the hands of security forces.

Up to 30,000 have fled their homes and analysis of satellite images by Human Rights Watch, the US rights monitor, found that hundreds of buildings in Rohingya villages have been razed.

Myanmar has denied allegations of abuse, saying the army is hunting “terrorists” behind raids on police posts last month.

The government has criticised media reports of rapes and killings, and lodged a protest over a UN official in Bangladesh who said the state was carrying out “ethnic cleansing” of Rohingya.

Al Jazeera’s Florence Looi, reporting from a camp for displaced people in Myanmar’s Sittwe, said human rights investigators and journalists have been blocked from accessing the areas where massacres are alleged to have happened.

“The Myanmar government has denied that these allegations of abuse have happened, but at the same time, they haven’t been giving people access to these areas,” she said.

“Many people we’ve spoken to say they aren’t very hopeful that the [UN] commission will be able to acheive anything.”

The OHCHR, the UN rights agency, says Myanmar’s treatment of the Rohingya could be tantamount to crimes against humanity, reiterating the findings of a June report.

“The government has largely failed to act on the recommendations made in a report by the UN Human Rights Office… (that) raised the possibility that the pattern of violations against the Rohingya may amount to crimes against humanity,” the OHCHR said in a statement on Tuesday.

Eight boats attempting to cross the Naf River separating Rakhine from southern Bangladesh were pushed back on Monday after six were refused entry on Sunday, Colonel Abuzar Al Zahid, the head of the border guards in the Bangladeshi frontier town of Teknaf, told AFP news agency.

Bangladesh says thousands more are massed on the border, but has refused urgent international appeals to let them in, instead calling on Myanmar to do more to stop people fleeing.

In the past two weeks, Bangladeshi border guards have prevented more than 1,000 Rohingya, including many women and children, from entering the country by boat, officials told AFP.

More than 120,000 Rohingya have been crammed into displacement camps since sectarian violence kicked off in 2012, where they are denied citizenship, healthcare and education and their movements are heavily curbed.

Amid the crisis, Annan on Tuesday began a week-long visit to Myanmar that will include a trip to northern Rakhine.

Aung San Suu Kyi in August appointed her fellow Nobel laureate to head a special commission to investigate how to mend bitter religious and ethnic divides that split the impoverished state.

Annan has expressed “deep concern” over the violence in Rakhine, which has seen thousands of Muslims take to the streets across Asia in protest.

But Aye Lwin, a Muslim member of the Rakhine commission, defended Aung San Suu Kyi’s handling of the crisis.

“What she has inherited is a dump of rubbish, a junkyard,” he told AFP, pointing out the army retains control of security and defence under a constitution written under the former junta.

“Her hands are tied – she can’t do anything. What she is doing is trying to talk and negotiate and build trust” with the army.” 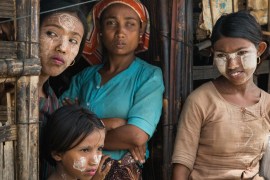 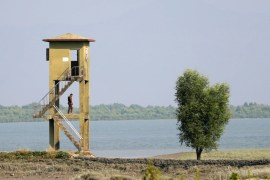 Eight boats carrying Rohingya refugees have been turned away by Bangladesh as thousands amass on the border. 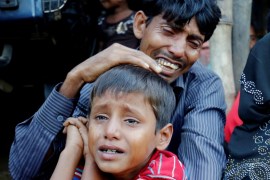